UK election night: What to watch for and when

In what has been a bitter and divisive election, here are five things that have stood out on the streets and towns of Britain over the course of the campaign. 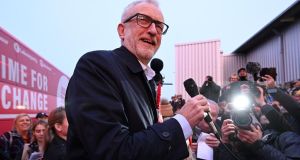 Labour Party leader Jeremy Corbyn during an election campaign event in Dinnington, near Sheffield, on the final day of campaigning on Wednesday. Photograph: Oli Scarff/AFP via Getty Images

With opinion polls classifying dozens of constituencies as too close to call, Britain’s election night is set to be a long one, with some of the most closely watched seats announcing well into the morning. Huw Edwards leads the coverage on BBC One now that David Dimbleby has stepped aside, with Jeremy Vine guarding the Swingometer and Andrew Neil on hand to grill the politicians.

Tom Bradby is in charge on ITV, assisted by Robert Peston and Allegra Stratton and Sky News features former Commons speaker John Bercow as its guest analyst. RTÉ One has coverage late into the night and irishtimes.com will be live blogging every jot and tittle, starting on Thursday afternoon.

The polls close, and an exit poll based on 20,000 interviews in 100 seats will give the first projection of the outcome. Exit polls have been broadly accurate in five of the six most recent UK elections, although they can be up to 20 seats out. As election expert John Curtice points out, in a contest like this one, five seats here or there could make the difference between a Conservative majority that will deliver Brexit by January 31st and a hung parliament that will produce a second referendum that could reverse the decision to leave the EU.

Houghton and Sunderland South, along with neighbouring Sunderland Central, will declare, probably remaining in Labour’s hands. But the margin of victory could offer a clue as to how Labour is faring in its traditional industrial heartland and whether the exit poll appears to be accurate. If you are not planning to stay up for another four or five hours, this is an excellent moment to go to bed because you won’t learn much for a while.

South Swindon, held by justice secretary Robert Buckland with a majority of less than 2,500, declares. If the Conservatives lose here, Boris Johnson is in trouble.

Workington, a Labour-held constituency in the northwest of England, is the kind of Leave-voting seat with an ageing population that the Conservatives should capture on a good night. Welsh marginal seat Wrexham declares, the first of a number of Conservative targets in Wales. If the Conservatives win Darlington, they will probably win a majority. And Sylvia Hermon’s former seat of North Down is a three-way contest between the DUP, the UUP and Alliance.

The Tories hope to capture Bury North, outside Manchester, from Labour. If Labour take Hastings and Rye or Thurrock from the Conservatives, we are probably heading for a hung parliament. The Conservatives’ performance in Angus, which the SNP is eyeing, will offer some evidence of how the party’s vote is holding up in Scotland.

Results start coming in at the rate of two a minute, including Tony Blair’s old seat of Sedgefield, which could fall to the Conservatives, and a number of marginals in Glasgow which will show how well the SNP is performing. Foreign secretary Dominic Raab will learn his fate in Esher and Walton; we will learn if former Conservative Dominic Grieve has held Beaconsfield as an Independent; and Belfast South and Belfast North will declare, with the DUP’s Emma Little-Pengelly expected to lose the former to the SDLP’s Claire Hanna and Nigel Dodds at risk to Sinn Fein’s John Finucane in the latter. A slew of seats in Labour’s so-called Red Wall will declare, possibly determining whether the Conservatives win a majority. Iain Duncan Smith’s constituency of Chingford and Woodford Green declares, a plausible candidate for this election’s “Portillo moment” if he loses to Labour’s Faiza Shaheen.

More Labour-held marginals declare, as does North East Fife, currently held by the SNP with a majority of just two votes. Kensington, where Labour has a majority of 20, declares as does Johnson’s seat of Uxbridge.

A flurry of Scottish results come in, alongside declarations from former Labour strongholds including Bolsover, where veteran left-winger Dennis Skinner is at risk. Also at risk is Conservative cabinet minister Theresa Villiers in Chipping Barnet.

The Liberal Democrats hope to oust Zac Goldsmith from Richmond Park, and the Conservatives are hoping to capture Brighton Kemptown and Derby North from Labour. And Independent Claire Wright could take East Devon from the Conservatives.

There are a few seats still to report but the result should be clear and an official declaration imminent.