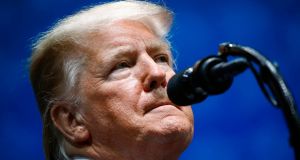 On Monday members of the House Judiciary Committee will once again file into the ornate Ways and Means committee room in the US Congress, for the next stage in the impeachment inquiry into Donald Trump.

That Donald Trump will become the third US president in history to be impeached is now all but certain.

The committee is likely to draw up articles of impeachment within the next week. It is then expected to recommend to the full House that the president should be removed from office. With Congress scheduled to stay in Washington until December 20th, an impeachment vote on the floor of the House is likely to take place just before Christmas. Should the House vote to impeach the president – which is highly likely – the process would then move to the Senate for a trial.

As the impeachment probe enters a decisive phase, there has been a shift in tone from the White House. While the Trump administration has so far railed against the process, denouncing the recent hearings’ private and public testimonies as a sham process, last week the president called for the Democrats to move quickly and move the process to the Senate. White House officials indicated that the administration would aggressively defend the president.

This bullishness reflects a political fact. While the House of Representatives, where Democrats are the majority party, have been in control of the impeachment probe so far, the dynamics will reverse when it goes to the Senate. Republicans, who hold 53 seats in the 100-member upper chamber, will then be in the driving seat.

While technically the constitution states that the chief justice will preside over the trial, in reality the Republican majority will have significant authority over the process. Senate majority leader Mitch McConnell who has been notably quiet of late but confirmed that he is reading books on impeachment, has refused to be drawn on how the trial may proceed. Trump has made his feelings clear however, suggesting in a tweet that Joe Biden and his son Hunter, as well as House intelligence committee chairman Adam Schiff, should testify. Whether Republican senators will bow to the president’s wishes remains to be seen. Senator Lindsey Graham, usually an ally of the president, suggested there are limits to what the Senate is prepared to do. “Are we going to start calling House members over here when we don’t like what they say or do? I don’t think so,” he said.

What is clear, however, is that Trump is a leader who relishes conflict, and will likely thrive on a battle, particularly one he is expected to win. His declaration on twitter that “We will win!” when Pelosi announced the impeachment process was proceeding, is an insight into how the president views this process – as the kind of partisan fight he embraces and he believes plays well with his supporters.

This combative approach is already gathering steam, with the White House running a social media “war-room” designed to attack the impeachment process

“The Founders began the Constitution with ‘We the People’ for a reason. Pelosi wants to negate the votes of 63M [illion] Americans,” said the chairwoman of the Republican National Committee in a tweet that was retweeted by Donald Trump. Fox News is also locking into step, with its presenters denouncing the process.

More worryingly for Democrats, some Republican groups are pouring money into ads into swing districts where Democrats are in power, in an attempt to capitalise on what they believe is the lack of enthusiasm for impeachment.

Polls show that while support for impeaching Trump has grown slightly, it is still highly divided along party lines. In swing states like Wisconsin, however, the majority are opposed to impeaching the president.

These political realities are no doubt known to House Speaker Nancy Pelosi. The top Democrat in Congress long resisted the move to impeach Trump. Despite calls from more left-wing members of her caucus to move forward with impeachment after the publication of the Mueller report, she was aware that some of her members representing more moderate, or Republican-leaning districts could be weakened by such a move. As recently as March she told the Washington Post she was “not for impeachment” – “unless there’s something so compelling and overwhelming and bipartisan, I don’t think we should go down that path”.

That line was crossed in September when details of Trump’s phone call with the Ukrainian president surfaced. After calls with senior members of her party, and the publication of an opinion piece by seven centrist first-term congress members advocating impeachment, Pelosi announced the opening of the impeachment probe. In the last week she has been eager to stress that she is recommending impeachment with a heavy heart, stating that her motivation is to uphold the constitution and fulfill her duties as the de facto head of Congress, a co-equal branch of government.

With the prospect of a bruising senate trial looming, the focus this week is likely to be on the content and scope of the articles of impeachment. One point of contention is whether the charges should focus on the Ukraine affair or include the findings of the Mueller report into Russian election interference which suggested that the president obstructed justice.

As Democrats mull over the finer legal points, those details are unlikely to interest the public. What will ultimately be remembered if the process reaches its inevitable conclusion is that Donald Trump will become the third American president to be impeached, a legacy no president wants.