Cameras recording Paul Ryan meeting Ohio Democrat Tim Ryan catch the US Speaker of the House referring to people from Kilkenny and Tipperary as as 'pig thieves or horse thieves'. Video: C-Span 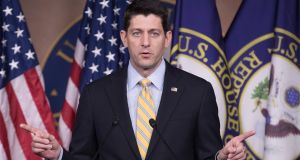 Speaker of the House Republican Paul Ryan has a hurley in his office - a gift he received from an Irish immigration group in 2013 and a nod to his Kilkenny roots. Photograph: Michael Reynolds/EPA

The speaker of US House of Representatives Paul Ryan has risked raising the ire of fierce county rivals Tipperary and Kilkenny by suggesting they might hail from “pig thieves or horse thieves”.

The Wisconsin Republican, who has Kilkenny roots, was caught on camera joking with Ohio Democrat Tim Ryan about his Irish heritage.

“Hey, it’s the pig stealer side of the family,” the speaker remarked.

“Do you ever get that: What side of the family are you on? Pig thieves or horse thieves, no?... Are you guys from Tipperary or Kilkenny, do you know?”

The bemused Democrat said he hadn’t figured out where in Ireland his family were from. Nonetheless, the speaker persisted:

“Here’s a question for you guys, which side of the family are you on, the pig thieves or the horse thieves?”

Ahead of last year’s St Patrick’s Day events in Washington, Paul Ryan spoke fondly a family trip to Graiguenamanagh, Co Kilkenny in 2015 where his great-great-grandmother grew up and from where she emigrated to the US.

The Ryans met their relatives, the O’Sheas, and found the old abbey where their ancestors were married.

Ryan jokes that a hurley in his office - a gift he received from an Irish immigration group in 2013 and a nod to his Kilkenny roots - has been useful since he became speaker, overseeing an unruly party.

“Whenever I pull that stick out, people know that they better shape up,” said the 2012 running mate to presidential nominee Mitt Romney.

1 More than 30 people queue overnight to secure property in Carlow
2 Coronavirus: Further 430 cases reported in State is most in a day since April
3 Trump paid no federal income taxes in 10 of past 15 years – report
4 Derry, Strabane and Donegal Covid-19 case rates lack ‘clear signal’
5 Gardaí appeal for information on rape of teenager in Co Mayo playground
Real news has value SUBSCRIBE