Four killed in attack outside courthouse in Izmir 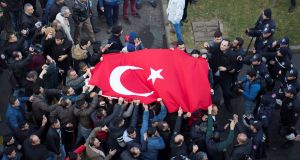 People holding a Turkish flag gather near the scene after an explosion outside a courthouse in Izmir, Turkey. Photograph: Tuncay Dersinlioglu 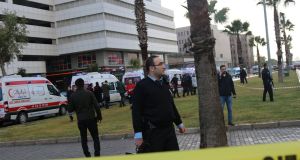 Police secure the area after an explosion outside a courthouse in Izmir, Turkey. Photograph: Hakan Akgun/Reuters 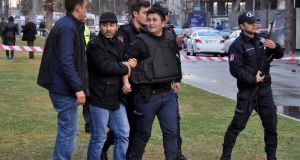 A police officer is evacuated after his colleague was killed near a courthouse in Izmir, Turkey. Photograph: Depo Photos/AFP/Getty Images

Turkish authorities say an attack outside a courthouse in Izmir that killed a police officer and court employee on Thursday afternoon may have been carried out by the Kurdish separatist group, the PKK.

Two of the attackers were also killed while a third was believed to be on the run.

In the incident, a bomb was detonated outside the courthouse, in the Bayrakli district of Turkey’s third largest city, before an exchange of gunfire took place.

“A clash erupted after our police officers wanted to stop a vehicle at a police checkpoint in front of Bayrakli courthouse.

“In this clash, terrorists detonated the car bomb while trying to escape,” the governor of Izmir province Erol Ayyildiz said.

A second explosive-rigged vehicle was disarmed at the scene and a number of automatic weapons and grenades were found.

Two people who were believed to have sold the vehicle used in the attack to the assailants were subsequently detained, security sources said.

The actions of police officer Fethi Sekin, who was killed, were reported to have prevented greater harm.

“Our heroic police officer martyred in this attack, Fethi Sekin, prevented a much bigger disaster happening, sacrificing his own life without a thought for it,” Turkish prime minister Binali Yildirim said, in a statement following the attack.

Television pictures showed police running away from the building, and urging pedestrians to leave the area; seven people were injured in the attack in a city regarded as one of Turkey’s more liberal urban centres.

The resort town of Kusadasi, a popular destination for Irish sunseekers, is situated 100km south of Izmir.

Cities and provinces in western Turkey had largely been spared the violence that has wracked other major Turkish cities and the southeast region.

The US embassy in Ankara warned its citizens to stay away from the area and “especially ... locations where Westerners, tourists, and expatriates are known to frequent, including but not limited to restaurants, commercial centres, places of worship, and transportation hubs”.

The attack is the second to have shaken the country since the beginning of the year, and the fourth in the past month.

Kurdish separatists are thought to have been responsible for attacks on police and security targets in Istanbul and Kayseri in December that killed 45 and 13 people respectively.

Investigators had been following up on reports that accomplices of the man suspected of shooting dead 39 people at the Reina nightclub anin Istanbul at a New Year’s Eve party had recently moved to Izmir, though that attack has been claimed by Islamic State.

The gunman in that attack is believed to be in hiding in Istanbul, 500km north of Izmir.

Details of the nightclub shooting have begun to emerge with the suspect said to have changed taxi four times after the attack, before spending the reminder of the night at a restaurant in the Zeytinburnu district.

Turkey’s deputy prime minister Veysi Kaynak said he believed the assailant could be an ethnic Uighur, a Turkic Muslim minority from central Asia and western China.

Istanbul police’s anti-terror branch detained a number of suspects outside Istanbul in connection with the nightclub attack on Thursday morning.

“Those who wanted to provoke a part of our society against another over a debate on lifestyles failed again,” he said on Wednesday.

“Our people, regardless of their origin and what they believe, see this very well.”