The Texas policeman seen in a viral video tossing a bathing suit-clad teenage girl to the ground has resigned from the McKinney Police force, the city's police chief said on Tuesday, calling the officer's actions indefensible. Video: REUTERS 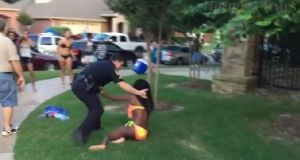 A teenage girl who was tackled and pinned on the ground by a police officer at a Texas pool party in 2015 has filed a federal lawsuit claiming that the officer used excessive force, and is seeking $5 million (€4.72m) in damages, the girl’s lawyer said Thursday.

Cellphone footage posted on YouTube showed the officer, Cpl David Eric Casebolt, who is white, throwing the teenager, Dajerria Becton, who is black and was 15 at the time, to the ground in McKinney, north of Dallas, in June 2015.

The jarring images and the protests that resulted became part of a nationwide debate about the treatment of African-Americans by police.

The officer resigned from the McKinney police department within days of the episode, but a grand jury decided last year not to charge him with any criminal offence. Ms Becton’s lawyer, Kim T Cole, said in a telephone interview on Thursday that she had filed the lawsuit in US District Court for the eastern district of Texas in December. She had not publicly announced the lawsuit until Wednesday.

NBC published a copy of the document, which names the officer, the city of McKinney and the McKinney police department as defendants. The lawsuit claims excessive force, assault and unlawful detention, and it described how the officer straddled Ms Becton and held her down with a knee on her back and neck.

Ms Cole said that, since the incident, Ms Becton has been affected psychologically, becoming fearful and struggling in school. “Emotionally, she is a wreck,” Ms Cole said.

Denise Lessard, a spokeswoman for the city of McKinney, said in a statement on Thursday that the city “denies the claims alleged against it and the McKinney police department and as such will vigorously” pursue a defence.

The Dallas Morning News identified James T Jeffrey as Mr Casebolt’s lawyer. He did not reply to a telephone message on Thursday. Mr Casebolt could not be reached for comment.

Ms Cole said in a news conference on Wednesday that Ms Becton’s abrasions, head and neck injuries from the episode were “not very severe” and had healed, but that the teenager has been enduring threats and racist cyberbullying on social media.