Trump continues criticism of US intelligence agencies ahead of briefing 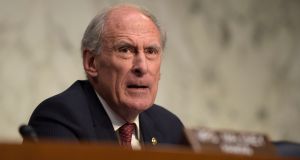 Donald Trump has chosen former Indiana senator, Dan Coats (above), to lead the Office of the Director of National Intelligence. Photograph: Susan Walsh/AP

Donald Trump has continued his criticism of the US intelligence community prior to a briefing about the Russian hacking of Democratic groups.

Since becoming president-elect, the businessman has repeatedly challenged intelligence officials’ assessments that Russia interfered with the election on his behalf, setting up an unusually public battle with the spy agencies.

On Friday, senior intelligence officials will try to justify their claims when they brief Mr Trump on the findings of a full report into the Russian hacking. The report was ordered by President Barack Obama, who was informed of the conclusions on Thursday.

Mr Trump sent a series of tweets, starting with one about broadcaster NBC: “How did NBC get ”an exclusive look into the top secret report he (Obama) was presented?“ Who gave them this report and why? Politics!”

He then tweeted to his 18.8 million followers: “The Democratic National Committee would not allow the FBI to study or see its computer info after it was supposedly hacked by Russia......

“So how and why are they so sure about hacking if they never even requested an examination of the computer servers? What is going on?”

A senior law enforcement official said the FBI repeatedly stressed to DNC officials the importance of obtaining direct access to the servers “only to be rebuffed until well after the initial compromise had been mitigated”. It was unclear whether the FBI did eventually access the Democratic National Committee servers.

How did NBC get "an exclusive look into the top secret report he (Obama) was presented?" Who gave them this report and why? Politics!

The Democratic National Committee would not allow the FBI to study or see its computer info after it was supposedly hacked by Russia......

So how and why are they so sure about hacking if they never even requested an examination of the computer servers? What is going on?

Mr Trump has chosen a former Indiana senator, Dan Coats, to lead the Office of the Director of National Intelligence, a role that would thrust him into the centre of the intelligence community.

Mr Coats served as a member of the Senate Intelligence Committee before retiring from Congress last year. If confirmed by the Senate, he would oversee the umbrella office created after the 9/11 terrorist attacks on the US to improve co-ordination of its spy and law enforcement agencies.

It was also reported that Mr Trump’s transition team has been considering ways to restructure intelligence agencies, said to be part of an effort to streamline operations and improve efficiency, not as retribution.

Transition officials have been looking at changes at both ODNI and the CIA, it was claimed, although Trump transition spokesman Sean Spicer said the report was “100 per cent false”.

The prospect of a sweeping overhaul created controversy, and contributed to former CIA director James Woolsey’s decision to step aside as a senior adviser to the president-elect.

In recent television appearances, Mr Woolsey — who was CIA director under president Bill Clinton — said he believed Russia was involved in the election-related hackings, though he also said others may have been as well.

Mr Coats has been a tough critic of Russia and pushed the Obama administration to harshly punish Moscow for its annexation of Crimea in 2014. When the White House levied sanctions, the Kremlin responded by banning several politicians, including Mr Coats, from travelling to Russia.

Mr Trump has called for improving the relationship between the US and Russia, and has also spoken favourably about Russian President Vladimir Putin. His refusal so far to accept the intelligence community’s assessment that Russia was meddling in the 2016 election has sparked concern among politicians in both parties.

Intelligence agencies have concluded that there is no question that Russia was behind hacking of political computer systems — something they say could only have occurred with the approval of top Kremlin officials.

That conclusion is detailed in the classified report Mr Obama ordered on Russian and other foreign influence in US elections dating back to 2008.