In an interview with PBS NewsHour, U.S. Vice President Joe Biden says of President-elect Donald Trump's it's 'time to be an adult... show us what you have.' Video: Reuters 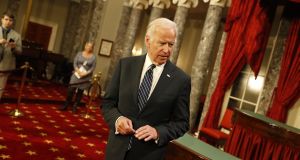 The rebuke from Joe Biden comes as tensions between the Trump transition team and the White House have flared in recent weeks. Photograph: Aaron P Bernstein/Getty Images

US vice-president Joe Biden admonished Donald Trump to “grow up” in an interview Thursday, after the president-elect mocked the top-ranking Senate Democrat as “head clown” and disparaged the intelligence community.

“Grow up, Donald. Grow up,” Mr Biden said in an interview with PBS NewsHour’s Judy Woodruff. “Time to be an adult. You’re president. You’ve got to do something. Show us what you have.”

Mr Biden spoke after Mr Trump in a tweet referred to Senate Minority Leader Chuck Schumer, a New York Democrat, as the party’s “head clown.” Earlier this week, Mr Trump speculated in a tweet that intelligence agency leaders decided to wait until Friday to brief him on findings that Russian intelligence was behind election hacking of Democratic officials’ e-mails because they “perhaps” needed “more time to build a case.”

During the interview Mr Biden said, “For a president not to have confidence in, not to be prepared to listen to, the myriad intelligence agencies, from defence intelligence to the CIA, is absolutely mindless.

“The idea that you may know more than the intelligence community knows - it’s like saying I know more about physics than my professor. I didn’t read the book, I just know I know more.”

The rebuke from Mr Biden comes as tensions between the Trump transition team and the White House have flared in recent weeks. Earlier Thursday, the president’s director of national intelligence, James Clapper, testified to Congress that Mr Trump’s tweets were impacting morale within the intelligence community.

Mr Biden said a declassified report set to be released next week would show “overwhelming evidence” that “Russia did engage in an effort to impact on the elections.”

Last week, Mr Trump accused the Obama administration of “inflammatory” statements and “roadblocks” in a post to Twitter.

The president and his successor subsequently spoke by phone, and both sides described the conversation as positive. But there have been clear public disagreements after Mr Trump attacked the administration’s decision to abstain from a United Nations Security Council vote declaring Israeli settlements in the West Bank illegal. Obama’s refusal to block the resolution with a veto allowed it to pass, enraging Israeli prime minister Benjamin Netanyahu.

Mr Trump also called on the administration to halt prisoner transfers from Guantanamo Bay; the Pentagon announced Thursday it had moved four more detainees out of the facility.

Mr Obama has also needled Mr Trump in recent public statements. In an interview published by CNN on Monday, the president said that he would have beaten Mr Trump had he run for a third term.