Russia to withdraw aircraft carrier in scale down of Syrian operations 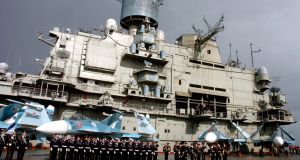 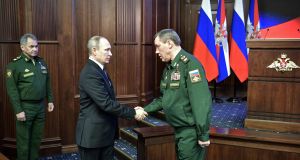 Russia has announced it is withdrawing its aircraft carrier and some other warships from the waters off Syria as the first step in a reduction of its forces in the war-torn Middle East country.

General Staff chief General Valery Gerasimov said the Admiral Kuznetsov carrier and accompanying ships will be the first to leave.

Gen Gerasimov was quoted by state news agency Tass as saying: “In accordance with the decision by the supreme commander-in-chief (President) Vladimir Putin, the defence ministry is starting to downsize the grouping of armed forces in Syria.”

Moscow has been a key supporter of President Bashar al–Assad’s government and forces in Syria’s devastating civil war.

Gen Gerasimov did not give further details on the force reduction, which follows an order by Mr Putin on December 29th.

Syrian forces’ retaking of the city of Aleppo last month and a Russian/Turkish-brokered ceasefire, in place for nearly a week, make Russian forces less critical to Mr Assad, but it is unclear how extensive the military reduction will be.

Air strikes from the Admiral Kuzetsov began in mid-November, the first time the carrier has been used in combat. It has lost two aircraft. An Su-33 fighter jet crashed in the Mediterranean Sea in December as it returned to the carrier following a sortie over Syria, and in November, a MiG-29 crashed into the sea while trying to land on the carrier.

Russia and Turkey, a strong supporter of Syria’s moderate opposition, brokered the ceasefire, which came into effect on December 30th. The truce has mostly held but not altogether halted fighting in the country, and the government and opposition have blamed each other for violations.

The ceasefire is meant to pave the way for peace negotiations in Astana, Kazakhstan’s capital, later this month. The gathering could give new impetus for UN-mediated talks between Syria’s warring sides.