Chicago Police Superintendent, Eddie Johnson, has labeled a video posted to Facebook Live of an attack on man with 'mental health challenges' as 'sickening'. Video: Reuters 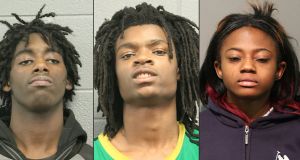 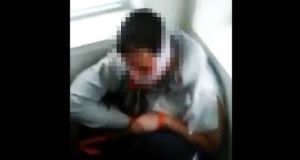 The victim, who is white, has ‘mental health challenges,’ Chicago police said. He was not identified. Photograph: YouTube

The parents of a teenager whose beating was broadcast live on Facebook received text messages at the time from someone claiming to be holding him captive, police have said.

The family had reported the 18-year-old missing on Monday in Streamwood, a Chicago suburb.

The parents said they had not heard from their son since New Year’s Eve, when he said he was going to stay over at a friend’s house. His mother told police she feared her son had not taken medication for a mental health disorder.

While investigating the messages, officers discovered the Facebook video. Chicago police later reported the man had been located.

Police said the investigation is continuing and have not said who may have sent the messages.

Two men and two women accused over the beating are due to make their first court appearances.

All four suspects are black and the victim is white. Authorities said the hate crime charges resulted from the suspects’ use of racial slurs and their references to the victim’s mental disability.

Video of the incident was captured on a mobile phone by one of the alleged assailants and viewed by millions on social media.

The uproar over the beating has intensified the glare on Chicago after a year of violent crime and protests against mayor Rahm Emanuel and the police department.

David Boyd, the victim’s brother-in-law, said such an episode “should never happen” at a news conference on Thursday. He said the family was overwhelmed by support expressed on social media.

The incident, part of which was streamed on the service Facebook Live on Tuesday, drew the attention of US President Barack Obama, who called it “terrible” in an interview with Chicago’s ABC-TV affiliate.

“Part of what technology allows us to see now is the terrible toll that racism and discrimination and hate takes on families and communities,” Mr Obama said.

Police said the victim knew at least one of his alleged torturers, and met Hill at a McDonald’s restaurant in a northwestern suburb of Chicago late last week.

When he did not return home the next day, the victim’s parents reported him missing. He was found by Chicago police days later, on Tuesday.

Police said Hill picked the victim up at the McDonald’s in a stolen van. While the victim’s parents reported him missing, their son and Hill spent the next two days together, visiting friends and sleeping in the van.

On Tuesday, a “play fight” between the two in the Covington sisters’ apartment escalated, Chicago police commander Kevin Duffin said at the news conference.

The victim was tied up for four or five hours, gagged and beaten. His scalp was cut and he was forced to drink toilet water, Mr Duffin said.

In the video, the attackers could be heard making comments about “white people” as the victim cowered in a corner, his mouth taped shut.

At least one of the attackers could also be heard stating obscenities about president-elect Donald Trump. Police said they did not know whether the victim was a Trump supporter.

Police officers located the victim on Tuesday after neighbours complained about noise coming from the apartment. He was outside in freezing weather wearing only a tank top, shorts and sandals, police said.

He was taken to a hospital and later released. Members of the public alerted investigators to the Facebook Live video.

Facebook refused to comment on how many people - if any - reported the video’s content, although there appear to have been many comments under the live stream made by horrified viewers who may have also used the report tool.

A spokeswoman for the company in a statement: “We do not allow people to celebrate or glorify crimes on Facebook and have removed the original video for this reason. In many instances, though, when people share this type of content, they are doing so to condemn violence or raise awareness about it. In that case, the video would be allowed.”

Facebook also pointed to a blogpost about community standards for Live Video , where it explains that it has a team on call 24 hours a day, seven days a week “dedicated to responding to reports” from users “immediately”. Reviewers can interrupt a live video stream if it violates the community standards and it only takes one report for an item of content to be reviewed. The company also monitors videos if they reach a certain level of popularity, even if they have not been reported.