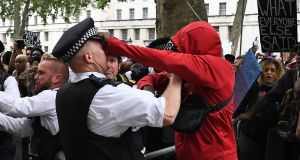 Protestors scuffle with police officers near the entrance to Downing Street during an anti-racism demonstration in London, Photograph: Daniel Leal-Olivas/AFP via Getty Images 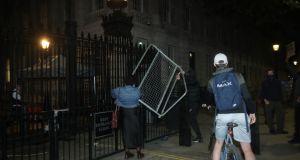 Pockets of protesters clashed with police after thousands of people flooded into central London for a Black Lives Matter demonstration in response to the death of George Floyd.

The Metropolitan Police said 13 people were arrested during the protests, which ran into the early hours of Thursday morning.

Star Wars actor John Boyega was among those to speak at the rally before protesters, many wearing masks and holding placards, marched on Westminster.

Mr Floyd died after a white officer held him down by pressing a knee into his neck in Minneapolis on May 25th, sparking days of protest in the US. Four police officers have been charged over his death.

British prime minister Boris Johnson said he was “appalled and sickened” to see what happened to Mr Floyd, while chief constables from across the UK issued a joint statement saying they “stand alongside all those across the globe who are appalled and horrified”.

Footage showed objects including signs and a traffic cone being thrown at police while one protester could be seen being wrestled to the ground and restrained by officers.

Some officers were seen “taking a knee” earlier in the day in solidarity with the demonstrators, but when protesters knelt at 6pm no police joined them.

At one point, police escorted a man to the side of the road who was bleeding from the head, with blood over his clothes and camera.

A crowd followed a group of officers to outside the Foreign and Commonwealth Office, where protesters shouted “answer for your crimes” and “no justice, no peace”.

Officers formed two lines and rested their batons on their shoulders, shouting “get back” at protesters as they separated the crowds.

A reporter from Nine News Australia was also filmed abandoning his live broadcast to flee as tensions flared up.

Scotland Yard said two men were arrested at Downing Street on suspicion of assaulting an emergency worker and violent disorder.

On Wednesday night, a group of protesters descended on police — who were wearing helmets and holding batons — outside the Cabinet Office, which had been daubed with “BLM” in black paint.

Both plastic and glass bottles were thrown in the direction of officers and protesters pulled down a line of temporary barriers outside Downing Street.

Despite rumours circulating on social media that The Cenotaph had been vandalised during the protests, police said they were “not aware of any damage”.

In the US, protests began in Minneapolis where Mr Floyd died, and quickly spread across the country.

Some have included clashes between police and protesters, including the use of tear gas and rubber bullets by officers.

US president Donald Trump has pressed state governors to take a more forceful approach against protesters.