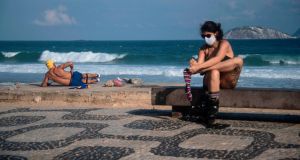 Coronavirus has infected more than 6.5 million people across the world and killed more than 388,000, according to a tally kept by Johns Hopkins University. Here are the latest updates on the pandemic from around the world:

Brazil is set to overtake Italy as the country with the third-highest Covid-19 death toll after a record 1,349 fatalities took its total to more than 32,500.

Brazil’s interim health minister made no immediate comment on the figures, which, unusually, were published late on Wednesday night in a move government critics suspect was designed to bury the bad news. The health ministry blamed “technical” problems for the delay.

But the numbers – which came as Mexico also reported a record daily tally of more than 1,000 deaths – reinforced fears that Latin America’s two biggest economies, and other countries in the region, were facing a bleak few months.

Mexico’s death toll now stands at nearly 12,000 with the number of infections rising above 100,000 on Wednesday. Chile is also grappling with a growing crisis, this week extending a quarantine of the capital, Santiago, as the country’s total number of fatalities rose to nearly 1,300.

Coronavirus cases have now been detected in more than 70 per cent of Brazilian cities, with the south-eastern states of Rio and Sao Paulo particularly badly hit.

Miguel Lago, the director of Brazil’s Institute for Health Policy Studies, said Brazil’s far-right president, Jair Bolsonaro, bore particular responsibility for the dire situation: both for the incompetence of his government’s response and for the political self-interest he believed had driven Bolsonaro to deliberately undermine social distancing in order to protect the economy - and his chances of re-election in 2022.

“He doesn’t care about the lives of the Brazilians who will die because of his absolutely irresponsible behaviour,” said Mr Lago.

Coronavirus infections are increasing in Sweden, while the number of deaths and people treated at intensive care continue to fall, the country's public health agency said on Thursday. Chief epidemiologist Anders Tegnell said the increase in cases could not solely be explained by increased testing. Sweden has registered 41,883 cases in total.

“Unfortunately, in Sweden, we can see an increase in cases again,” he told a news conference, urging people not to ease up on social distancing.

Sweden has not imposed a lockdown, instead relying primarily on voluntary measures focused on social distancing and hygiene. It has kept most schools, restaurants and businesses open.

Tegnell said the increases in new cases was seen primarily in Western Sweden and among younger people than before.

“Cases among the really old have declined quite rapidly. It shows the measures taken have had an effect,” he said. “There’s reason to believe the decline in deaths will continue.”

Sweden registered 20 new deaths on Thursday, taking the total to 4,562, much higher than in neighbouring Nordic countries but also much lower than the United Kingdom, Italy, France and Spain.

New Zealand is on the verge of eradicating the virus from its shores after it notched a 13th straight day with no reported new infections. Only a single person in the nation of five million people is known to still have the virus, and that person is not in hospital. However, it remains likely that the country will import new cases once it reopens its borders, and officials say their aim remains to stamp out new infections as they arise. The country has already lifted many of its virus restrictions and could remove most of those that remain, including limiting crowd sizes, next week. Just over 1,500 people have contracted the virus during the outbreak, including 22 who died.

On Thursday Mexico’s president, the leftwing populist Andres Manuel Lopez Obrador, urged his 129 million citizens not to allow the rising numbers of deaths and infections to condemn them to “psychosis, apprehension or fear”.

“I think our strategy has been the right one,” he reportedly told reporters in the southern state of Chiapas which he is visiting after restarting his travels this week as part of what he calls Mexico’s “new normal”. “We were lucky enough the pandemic didn’t arrive here first, which gave us time to get ready.”

Mexico, with just over a third of the population of the United States, is at an earlier stage of the pandemic curve than its neighbour and the government has acknowledged that deaths could eventually surpass 30,000.

A planeload of 150 ventilators arrived in Russia from the US on Thursday, Washington’s embassy in Moscow said, to help fight the novel coronavirus in further medical aid collaboration between the two politically-estranged nations. Russia’s case tally, the world’s third highest, rose to 441,108 on Thursday after 8,831 new infections were reported, and 169 more people died in the previous 24 hours. At 5,384, Russia’s death toll is lower than many other countries, sparking debate over the way it counts fatalities. Russia cites a huge testing programme – it says more than 11.7 million tests have been conducted - as the reason for its large number of reported cases, and says many positive cases involve Russians without symptoms of the virus. On Wednesday, official data showed Russia’s second biggest city of St Petersburg recorded a death rate last month 32 per cent higher than the previous year, suggesting more people could be dying of Covid-19 than are being reported.

Spanish legislators have voted to extend for two additional weeks the state of emergency that allows the government to restrict movement and other rights as part of its fight against the coronavirus pandemic. Prime minister Pedro Sanchez says Spain has “overcome the worst of the pandemic” and declared that he will not seek further extensions beyond the end date of the special powers at midnight on June 21st. The extension was passed on Wednesday with 177 votes in the 350-seat Congress of Deputies. There were 155 votes against it, while 18 abstained.

Germany said it will lift a travel ban for European Union members plus the UK, Iceland, Norway, Liechtenstein and Switzerland from June 15th as long as there are no entry bans or large-scale lockdowns in those countries.

A city in central Germany has closed its schools for the rest of the week and is testing hundreds of people in a residential complex after 80 coronavirus infections were linked to private events marking the end of Ramadan. Goettingen Mayor Rolf-Georg Koehler said that all residents of the complex at the centre of the outbreak will be tested — up to 700 people. Officials said that 230 people in and around Goettingen and another 140 further afield are in quarantine after the infections were detected. News agency dpa reported that, since the infected include 24 children, the city is closing its schools this week and will require the wearing of masks for the two following weeks.

The Chinese city of Wuhan has tested nearly all of its 11 million citizens for coronavirus in a mass effort that resulted in the isolation of 300 people, authorities said. The pandemic is believed to have originated last year in the industrial city that went under lockdown for 76 days to try to stop the outbreak. Wuhan still accounts for the bulk of China’s 83,021 cases and 4,634 deaths from the disease. The testing effort carried out in the second half of May targeted every resident not already tested and excluded only children under six. “This is extraordinarily rare anywhere in the world,” said national health commission expert Li Lanjuan. “It not only shows confidence and determination in the fight against the epidemic in Wuhan, but has also provided reference to other cities for their prevention.” No active, unknown cases of Covid-19 were found from the testing effort, although 300 people who tested positive for the virus without showing symptoms were placed in isolation. – Agencies