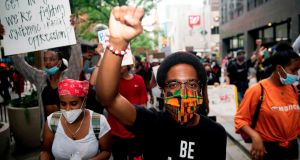 Demonstrators march in Denver, Colorado on Wednesday, while protesting the death of George Floyd, an unarmed black man who died while while being arrested and pinned to the ground by the knee of a Minneapolis police officer. Photograph: Jason Connolly/AFP

Hundreds of people were arrested in New York last night after demonstrators defied an 8pm curfew and continued to protest against the killing of African-American man George Floyd last week in Minneapolis.

Marches took place for a ninth night in several cities across the nation, with huge crowds taking to the streets of Philadelphia, Chicago, Los Angeles and smaller urban centres around the country.

In Washington, the area around the White House saw in increase in military presence and John’s Church, where president Donald Trump posed with a bible on Monday, was off limits to protestors. Demonstrators continued to gather throughout the day, chanting “Hands Up - Don’t Shoot” and “Black Lives Matter” as police in riot gear lined up across 16th Street.

Meanwhile, former US defence secretary James Mattis launched a blistering attack on Mr Trump, as he denounced the president’s threat to deploy the US military to help quell the protests.

In a statement released to The Atlantic, Mr Mattis, a four star general who retired from the Trump administration in 2018, said Mr Trump was “the first president in my lifetime who does not try to unite the American people – does not even pretend to try.”

In particular, he excoriated Mr Trump’s threat to call up the military to intervene in protests that have been taking place to express public anger at the death of Mr Floyd (46) who died after he was restrained by a police man who pressed his knee on his neck last week in Minneapolis.

The death of Mr Floyd has caused shockwaves across America and the world, prompting widespread protests at what is perceived to be institutional racism in the criminal justice system in the United States.

An independent autopsy commissioned by Mr Floyd’s family found that he died of asphyxia and a loss of blood flow to the brain – contradicting an initial preliminary report which found that the autopsy “revealed no physical findings that support a diagnosis of traumatic asphyxia or strangulation”, and pointed to Mr Floyd’s pre-existing heart conditions.

“When I joined the military, some 50 years ago, I swore an oath to support and defend the constitution,” Mr Mattis said.

“Never did I dream that troops taking that same oath would be ordered under any circumstance to violate the constitutional rights of their fellow citizens-much less to provide a bizarre photo op for the elected commander-in-chief, with military leadership standing alongside.”

Shortly after, Mr Trump hit back at his former defence secretary on Twitter. “Probably the only thing Barack Obama & I have in common is that we both had the honor of firing Jim Mattis, the world’s most overrated General,” he wrote. “His primary strength was not military, but rather personal public relations. I gave him a new life, things to do, and battles to win, but he seldom “brought home the bacon”.”

Mr Mattis’s intervention comes as the current defence secretary Mark Esper, said he disagreed with Mr Trump’s threat to invoke the 1807 Insurrection Act and deploy the US military to respond to the current protests.

“The option to use active-duty forces in a law enforcement role should only be used as a matter of last resort and only in the most urgent and dire of situations,” he said at a news conference. “We are not in one of those situations now. I do not support invoking the Insurrection Act.”

Asked if Mr Trump still had confidence in the Pentagon chief, White House press secretary Kayleigh McEnany said on Wednesday afternoon: “As of right now, Secretary Esper is still Secretary Esper and should the president lose faith we will all learn about that in the future.”

Tensions between the president and the military increased last night as Mr Esper appeared to overturn an earlier decision to send 200 active-duty soldiers home from Washington. There was a heavy police presence around the increasingly fortified White House area last night as the city witnessed its sixth consecutive night of protests, though the violent scenes that emerged on Monday were not replicated.

In his first public remarks on the protests on Wednesday, former US president Barack Obama urged those protesting in the United States to seize on the momentum created by the recent demonstrations against the death of Mr Floyd, as he paid tribute to those who have died in recent weeks.

The recent deaths of Mr Floyd and others were a “result of a long history, of slavery of Jim Crow, of red lining and institutionalised racism that too often have been the plague, the original sin of our society,” he said.

But he also struck a hopeful note, adding that, “as tragic as these past few weeks have been . . . they’ve also been an incredible opportunity for people to be awakened to some of these underlying trends.”

Addressing directly the families of Mr Floyd, Breonna Taylor, Ahmaud Arbery - all African-Americans who were killed by white people in recent months - he said: “Please know that Michelle and I, and the nation grieve with you, hold you in our prayers. We’re committed to the fight of creating a more just nation in the memory of your sons and daughters.”

Mr Obama, who was the first African-American to be elected president in 2009, noted that many of the leading figures of the civil rights movement and other progressive causes like Martin Luther King and Malcolm X were young when they tried to implement change in American society.

He said that, compared to the protests of the 1960s, “there is something different” taking place now, with “a far more representative cross-section of America out on the streets peacefully protesting.”

“There is a change in mindset taking place, a greater recognition that we can do better. That is not as a consequence of speeches by politicians, that’s not a result of spotlights in news articles. That’s a direct result of activities and organisation and mobilisation and engagement of so many young people.”

Mr Obama was speaking during a virtual townhall, highlighting a policing non-profit initiative supported by the Obama Foundation. During his address he highlighted the importance of reforming policing at a local level.

He also rejected the notion that there is a binary choice between protest on the one hand and politics and voting on the other. “This is not an either–or, this is a both–and,” he said. “To bring about real change we both have to highlight a problem and make people in power uncomfortable, but we also have to transform that into practical solutions.”

The protests continued on Wednesday night as fresh charges were brought in the Mr Floyd case, as Minnesota’s attorney general announced that all four police officers involved in the death of Mr Floyd will face criminal prosecution.

Derek Chauvin, the police officer who pressed his knee on the neck of Mr Floyd for several minutes even when the detainee had stopped breathing, now faces the elevated charge of second-degree murder, having initially been charged with the lesser crime of third-degree murder.

The other three police officers, Thomas Lane, J Kueng and Tou Thao, who took part in the arrest of Mr Floyd which culminated in his death, have been charged with aiding and abetting second-degree murder. They were fired from their jobs as police officers last week.

Earlier, the attorney for the Floyd family, Ben Crump, called on all four officers involved in the death of Mr Floyd to be charged, as he visited the site where he died with members of the family.

“We cannot have two justice systems in America - one for Black Americans and one for White Americans. . . we must have equal justice for the United States of America,” he said.