US on course for a less than revolutionary administration 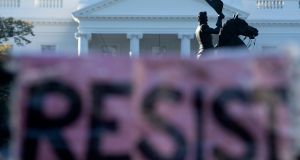 ‘Radical laws and sharp ruptures from the status quo require either decisive majorities or support from the other side. A divided electorate allows for neither.’

As ever, Tom Wolfe got there first. Readers had expected the author of The Bonfire of the Vanities to “do” Los Angeles or Chicago after his treatment of 1980s New York. Instead, the place that drew his fine eye for trends was Atlanta.

A Man in Full considered the city, and the state that it anchors, as America’s potential future. Some 23 years on, Georgia continues to grow in population as several other states shrink. Once uncompetitively Republican, it is now the nation’s political schism in miniature.

Nowhere was closer-fought in the US presidential election two months ago. If the Democrats take both of its Senate seats, to go with Joe Biden’s win there, imagine the symbolism. Here is a party going with the grain of the nation’s evolution.

But not, it is worth saying, a party with a suddenly free hand. A split Senate, with the vice-president casting decisive votes, does not assure Biden a radical presidency. His chances of that waned when the “blue wave” of congressional gains failed to materialise in November. His subsequent nominations to the executive – their mildness, their familiarity – admit as much. His flirtations with the left are just a few months old but feel a century ago.

His first problem is that a Senate majority is only as good as its internal cohesion. Conservative Democrats are not the force they were but, in a tight vote, it takes just a few to scuttle progressive dreams. West Virginia’s Joe Manchin is one who has to mind his red-state electors. Kyrsten Sinema of Arizona, Georgia-like in its competitiveness, has no more incentive to rile swing- or right-leaning voters.

Any defections on his own side would leave Biden exposed to Republican intransigence. What hope there was of a more co-operative party post-November is embarrassing to recall now. In its bogusness and tenacity, Donald Trump’s quest to overturn his election defeat somehow intensifies by the week. Nothing in his presidency became him less than the leaving of it.

But leave it he will. It is the conduct of the Republicans who remain in Washington that promises an ordeal for Biden. A dozen or so senators plan to contest the certification of the election result. That is more than a fifth of the Republicans there. Estimates of like-minded colleagues in the lower chamber exceed 100.

And this is three years ahead of a presidential nomination race that will only incentivise such pandering to right-wing grassroots. Some of those activists will march against certification on Wednesday. A party that will not grant the president-elect’s legitimacy is not going to consider his legislation on its merits.

And so the US is on course for a less than revolutionary administration. But then it has known no other for some time. Bill Clinton and Barack Obama were supernaturally gifted politicians. Both lost Congress at their first mid-term elections, and their domestic programmes with it. Clinton did not even have a landmark statute to show for two years of unified government. As for Trump, he secured a tax cut before losing the House of Representatives at the first time of asking – never to recover.

Come to think of it, no US administration since the 1980s could be described as transformative, at least on the home front. Presidents still have their executive orders and discretion in foreign affairs. But social change on the Lyndon Johnson-Ronald Reagan scale tends to entail legislation, and lots of it. With the exception of Obamacare, the boldest versions have not survived Washington’s sieve in recent decades.

The evidence nudges us to a conclusion that is no less true for its perverseness. The real winners of the age of partisanship are those who hate it most. The winners are the moderates. Radical laws and sharp ruptures from the status quo require either decisive majorities or support from the other side. A divided electorate allows for neither.

America’s bifurcation, once it feeds into legislative numbers and conduct, puts paid to grand schemes. Voters in the middle find themselves in the oddest of predicaments: scandalised by the viciousness of politics and yet served by its results.

“Moderate”, to be clear, is not a synonym for “good”. This time last year, immoderate measures against the coronavirus pandemic would have saved lives. Splitting the difference on Trump’s attempt to stay in office would be a nonsense. Equidistance from opposing arguments is no guarantor of sound policy.

It is with surprise, then, not elation, that we should record this oddity of modern politics. Our era is one of extreme sentiments and loyalties. It is not always one of extreme outcomes. – Copyright The Financial Times Limited 2021