US president Donald Trump has told a rally in Georgia that he hopes US vice-president Mike Pence will "come through for us" as he prepares to preside over the official declaration of US election results at a joint session of Congress. 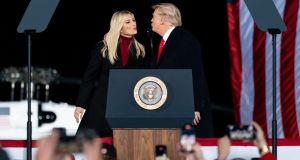 US president Donald Trump falsely claimed that he “won the election in a landslide”, as he held a “victory rally” in Georgia on Monday night.

The event, held on the eve of Tuesday’s Senate run-off elections in Georgia, was ostensibly a get-out-the vote event for the two Republican candidates, David Perdue and Kelly Loeffler.

But Mr Trump spent much of the evening claiming that he had won the presidential election, asserting that he would still win in “six or maybe eight” states, despite president-elect Joe Biden’s decisive victory in November.

“They’re not going to take the White House, we’re going to fight like hell,” he said of Democrats, adding: “When you win in a landslide, and they steal it and it’s rigged, it’s not acceptable.”

Mr Trump also appeared to challenge vice-president Mike Pence to overturn the election result on Wednesday when he is due to preside over the official declaration of results at a joint session of Congress.

At least 12 Republican senators have said they will challenge the election result when the Electoral College tallies are counted tomorrow. Mr Pence has said he supports their efforts, but it is unclear if he will declare Mr Biden the winner of the election when the results are declared for the Democrat as expected. Appearing alongside Mr Trump at last night’s rally, Ms Loeffler said she would join the group of senators opposing the election result.

Mr Trump also hit out at the US supreme court, following its refusal to take up cases related to his claims of election fraud.

“I’m not happy with the supreme court. They’re not stepping up to the plate,” he said. “If you’re the president of the United States and you get defrauded out of an election, you should be able to file a suit, but we can’t do that.”

Georgia’s governor Brian Kemp and secretary of state Brad Raffensperger, who was pressured by the president to “find” extra votes during a phone call on Saturday, also came under fire during the president’s event.

“I’ll be here in about a year-and-a-half campaigning against your governor, I can guarantee you that,” he said. Mr Trump has slammed Mr Kemp for certifying the results in Georgia. At Monday night’s rally he denounced Mr Raffensperger as “crazy”, and repeated many of the discredited allegations he made about voter fraud in his phone call with the top election official on Saturday.

Mr Raffensperger has dismissed Mr Trump’s claims as “just plain wrong” and said they were based on “bad data”.

He added: “The Democrats are trying to steal the White House ... you can’t let them steel the US Senate.”

Among those who addressed the event were Marjorie Taylor Greene, the Q-Anon supporter who was recently elected to Congress, and Mr Trump’s daughter Ivanka. Ms Trump hailed her father as “the people’s president” who “will never stop fighting”.

“Georgia is going to keep freedom alive in America,” she said, as she urged the attendees to send the two Republican senators back to Washington.

Earlier in the evening ahead of Mr Trump’s arrival, the president’s son Donald jnr and his girlfriend Kimberley Guilfoyle addressed the crowd.

All eyes are on Georgia on Tuesday where the two remaining seats in the Senate will be decided. The contests went to run-offs after no candidate reached the 50 per cent threshold needed to win the elections on November 3rd.

Democrat Jon Ossoff (33) is challenging Mr Perdue for his seat, while Ms Loeffler, widely regarded as the wealthiest member of Congress, is facing a challenge for her Senate seat from Atlanta preacher Raphael Warnock.

Republicans need to win only one of the races to secure a majority in the Senate. Democrats, in contrast, need to win both contests to hold 50 seats in the 100-seat upper chamber, giving the party an effective majority as incoming vice-president Kamala Harris will have the power to cast tie-breaking votes.

Campaigning with the two Democratic candidates at a drive-in rally in Atlanta on Monday, Mr Biden said that control of the Senate, and the fate of much-promised stimulus checks for Americans, rested with voters on Tuesday.

“The power is literally in your hands. By electing Jon and the Reverend [Warnock]three million people have already voted in the run-off races, and there are hopes on the Democratic side that the party can recreate the voting mobilisation effort that led to Mr Biden becoming the first Democratic presidential candidate in three decades to win the southern state.

An extra 76,000 people have registered to vote since November’s election, most of whom are expected to vote Democrat according to party officials. But Democrats are also concerned that Mr Biden’s victory may have reflected a desire by voters to remove Mr Trump, a dynamic that will be absent from today’s run-off elections.

Former president Barack Obama urged people to vote in Tuesday’s elections, warning that “the stakes could not be higher”.

“We’re seeing how far some will go to retain power and threaten the fundamental principles of our democracy,” he tweeted, an apparent reference to Mr Trump’s efforts to pressure Mr Raffensperger. “But our democracy isn’t about any individual, even a president - it’s about you,” he said.