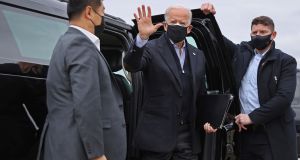 President-elect Joe Biden prepares to depart for Georgia, where he is scheduled to campaign with Democratic Senate candidates Jon Ossoff and Rev Raphael Warnock on Monday. Photograph: Chip Somodevilla/Getty Images

US vice-president Mike Pence warned Republicans that “the stakes in this election have never been higher” as he urged supporters to vote in Tuesday’s run-off Senate races in Georgia.

Two Republicans – David Perdue and Kelly Loeffler – face Democratic challengers in a pair of elections that will determine which party controls the upper house of Congress. Republicans need to win just one of the seats to secure a majority in the chamber, while Democrats need to win both in order to hold 50 of the 100 seats, giving the party a working majority as incoming vice-president Kamala Harris would have the casting vote.

Campaigning in Milner, Georgia, on the eve of the election, Mr Pence said he shared the concerns of many about the integrity of November’s presidential election, but stressed that the focus should now be on Tuesday’s races.

“Georgia needs two senators who will get in the way of the radical agenda of the Democratic Party, ” he said to cheers at the event at Rock Springs church. “We are going to keep Georgia. And we will save America.”

Describing Donald Trump as the most pro-life president in US history, he said: “We have got to have Georgia hold the line. Will you do it? I believe you will because I have faith, just like all of you. The eyes of America are on Georgia.”

Mr Trump, who was due to hold a “victory rally” in Georgia on Monday night, has waded into the state’s politics in recent weeks, most recently in a recorded phone call with secretary of state Brad Raffensperger on Saturday during which he pressured the official to “find” more votes.

The president’s claims that Tuesday’s Senate races are “illegitimate and invalid” even as he was ostensibly due to campaign for the two Republicans on the ticket has worried some in the party that he could discourage turnout among Republican supporters.

More than three million Georgia residents have already cast their votes in early voting, which finished last Thursday. This surpasses the previous turnout record for a run-off election in the state, set in 2008. Democrats are more likely to vote early, while Republican turnout is expected to be higher on election day.

Former gubernatorial candidate Stacey Abrams has said that counting in the two races could continue for several days, as was the case in November’s presidential and congressional elections.

President-elect Joe Biden campaigned with the two Democratic candidates, 33-year-old Jon Ossoff and Rev Raphael Warnock (51), at a drive-in rally in Atlanta on Monday, amid hopes on the Democratic side that the party can recreate the voting mobilisation effort that led to Mr Biden becoming the first Democratic presidential candidate in three decades to win the southern state.

An extra 76,000 people have registered to vote since November’s election, most of whom are expected to vote Democrat, according to party officials. But Democrats are also concerned that Mr Biden’s victory in November may have reflected a desire by voters to remove Mr Trump, a dynamic that will be absent from Tuesday’s run-off elections.

Former president Barack Obama urged people to vote in the run-off elections, echoing Mr Pence’s claim that “the stakes could not be higher”.

“We’re seeing how far some will go to retain power and threaten the fundamental principles of our democracy,” he tweeted, an apparent reference to Mr Trump’s efforts to pressure Mr Raffensperger. “But our democracy isn’t about any individual, even a president – it’s about you,” he said.