US Politics: An academic blames ‘elite overproduction’ for breeding resentment in society 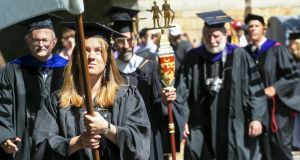 Americans are living through the restoration of their deposed oligarchy. President-elect Joe Biden has nominated a treasury secretary who used to chair the Federal Reserve. His choice for secretary of state is another Ivy Leaguer and fixture of Washington. His top economic adviser is an executive at BlackRock.

At each stage of their lives, these individuals saw off an unknown number of also-rans. Most MBAs never shine on Wall Street, just as most Washington lifers never land a West Wing desk. Not quite elite, yet too successful for sympathy: imagine their pique.

Peter Turchin, the academic of the moment, does more than that. He quantifies, cross-refers with other variables and arrives at a theory. Of all the reasons adduced for the political strife of our time, few are as novel as his stress on “elite overproduction”. Graduates have multiplied faster than the room at the top, he says, with the “lawyer glut” being especially gross.

The result is a stock of nearly-men and women whose relationship with their own class sours from peripheral membership to vicious resentment. If this coincides with a bad time for the general standard of living, there is an alliance to be formed between these snubbed insiders and the more legitimately aggrieved masses.

After some acquaintance with Turchin’s work, it is not just Donald Trump’s rise to the White House that takes on a different cast. So too does Brexit. There were never enough working-class whites in the UK’s deindustrialised towns to form a national majority. The campaign had to peel off lots of ostensibly rich people, both as voters and as leaders of the movement. The nation’s prosperous home counties voted to leave the EU. Liverpool, the poorest big city, voted to remain. It was hard to credit the sense of grievance among asset-rich baby boomers on the mean streets of Hampshire.

Nor does the theory exhaust its usefulness with the populist right. What is woke culture if not the howl of a generation of underemployed humanities graduates? Since Allan Bloom wrote the Closing of the American Mind in 1987, the right has deplored the substance of what the young are taught. “Critical theory” and the politicisation of the west’s literary canon cause particular anguish.

But the problem may be the raw numbers of students, not the precise flavour of their indoctrination. There are only so many jobs for them in publishing and the news media. There are only so many seats in Congress. If postmodern theories vanished from campus, would this surplus of frustrated graduates really just go about their lives as room-temperature liberals?

Turchin is a member of no fewer than three departments at the University of Connecticut. “Cliodynamics”, his polymathic effort to give the study of history some of science’s quantitative rigour, is prone to over-reach. But one need not ride with him all the way to see that his core insight, the narcissism of small differences, recurs over time and space. It was not the most impoverished people in France who overturned the ancien régime. It was those several tiers above, held back by class rigidities from the pursuit of their happiness.

If Turchin is right, there is a reckoning on the way for liberals, but a far larger one for their populist enemies.

The first group has to accept that one of its civilising glories – the expansion of higher education – also had perverse consequences. Without a corresponding growth in glamour jobs, it stored up resentment that was always going to find public expression. It is a pan-western problem but the fallout is worse in the US because university can indebt people so monstrously there.

Still, liberals can at least trim the academic-industrial complex over time. For populists, the Turchin theory implies a much less fixable problem. If their movement unites the not-quite-elite and the Hillbilly Elegy classes, no governing programme can serve them both. The more time that populists spend in power, the likelier their irreconcilable interests are to show through.

The past four years have underscored the quandary. Had Trump governed as an economic populist, taxing the rich to build infrastructure, he might have won a second term. But he would also have forfeited the Fox News anchors, the lavish donors, the high-income voters: people who liked him because he scandalised those slightly above them in the US prestige league.

They are not the same as those who voted for him as deliverance from real hardship. Formal government exposes the incoherence of the populists. Their recourse, says Turchin, lest we relax, might be the politics of the street. – Copyright The Financial Times Limited 2020