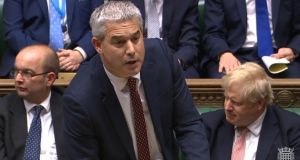 Stephen Barclay, the UK’s Brexit secretary: “We will restore trust in this House and in our democracy. Once Brexit is delivered on 31st January, we can turn our eyes towards our other national priorities.” Photograph: EPA

MPs have overwhelmingly approved Boris Johnson’s Withdrawal Agreement Bill, making certain Britain’s departure from the European Union on January 31st. The bill was passed by 331 votes to 231, a majority of 99 with all Conservatives who voted backing the legislation.

The SDLP and Alliance joined other opposition parties in voting against the bill but the DUP’s eight MPs abstained. The bill goes to the House of Lords for further scrutiny next week and if it is amended there it will return to the Commons. The Conservatives’ 80-seat majority means, however, that its fate is not in doubt.

The bill ratifies the withdrawal agreement, including its Northern Ireland protocol, and legislates for an 11-month transition period until the end of this year when Britain will continue to follow all EU rules.

Alliance MP Stephen Farry said the Brexit deal had brought his party together with the DUP and the SDLP to back amendments aimed at ensuring unfettered access for Northern Ireland businesses to markets in the rest of the United Kingdom.

But he warned against forcing on Northern Ireland a choice between some sort of border on the island of Ireland and a border down the Irish Sea.

“We want to avoid both those possibilities, but there will be a huge challenge in the way things have fallen in that respect. Indeed, the Assembly has almost been set up with this choice to make in four or eight years’ time: whether to maintain ongoing regulatory alignment for goods on an all-island and European basis, or align with the rest of the UK. It is not a choice that anyone particularly relishes and it builds a degree of instability into our political structures,” he said.

Brexit secretary Stephen Barclay said passing the bill showed that, after three years of wrangling over Brexit, MPs had listened to what the people wanted and acted upon it.

“In doing so, we will restore trust in this House and in our democracy. Once Brexit is delivered on 31st January, we can turn our eyes towards our other national priorities: education and skills; making our country safer; investing in the future of our much-loved NHS; and levelling up all parts of the United Kingdom. This is what people care about,” he said.

The Liberal Democrats’ Brexit spokesman Alistair Carmichael said his party would continue to oppose the bill and would attempt to secure the rights he claimed the government wanted to erase.

“They have voted for a Bill that will slash the rights of future generations to live and work across 27 other countries. They have voted for a Bill that strips away our guaranteed environmental protections, despite the fact that we are facing a climate emergency. These are the actions of an inhumane and insular government, driven by toxic rhetoric rather than the national interest,” he said.