Iran in frame for downing Ukrainian jet, say US and Canada

Destruction of the airliner ‘may well have been unintentional’, says Justin Trudeau 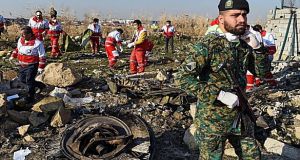 A total of 63 Canadians, many of Iranian descent, were among the passengers and crew who died. Photograph: Bloomberg

The Ukrainian jet that crashed in Iran on Wednesday killing 176 people was downed by an Iranian surface-to-air missile, US and Canadian officials have said.

The Boeing 737-800 plunged to earth in flames about 10km from Tehran airport just hours after Iran launched ballistic missiles at Iraqi military bases housing US troops in retaliation for the US killing of Iranian commander Qassem Suleimani last week.

Canadian prime minister Justin Trudeau told a news conference in Ottawa that the destruction of the airliner “may well have been unintentional”.

“We have intelligence from multiple sources, including our allies and our own intelligence. The evidence indicates that the plane was shot down by an Iranian surface-to-air missile,” he said. A total of 63 Canadians, many of Iranian descent, were among the passengers and crew who died.

Earlier, US president Donald Trump said that “somebody could’ve made a mistake on the other side”, referring to Iran, as he was asked about the downed plane. “It’s a tragic thing,” he added. US officials said US satellites had detected the activation of an anti-aircraft battery, launch of two missiles and apparent explosion of the airliner which was en route to Kiev.

Iran has said that an unspecified technical fault crippled the jet, though on Thursday night Iranian officials said it had begun investigations “in accordance with international standards”.

Earlier on Thursday, Iran’s civil aviation authority said in a preliminary report that the jet had turned back towards the airport before crashing, and that “no radio messages were received from the pilot regarding unusual situations”.

On Iran’s Press TV transport minister Mohammad Eslamisaid: “There are rumours that a terrorist attack, explosion or shooting at the plane may have caused the incident, but they are not true. Technical failure has been the cause of the incident.

“Had the rumours been true, the plane must have exploded up in the air, but that has not happened, because the plane caught fire due to technical failure. That first caused its communications and control systems to stop working, and subsequently resulted in its crash.”

Ukraine was still examining several other theories, however, as 45 Ukrainian officials landed in Tehran to start investigative work. Kiev’s team in Iran included experts from its investigation into the MH17 disaster of 2014, when a Russian missile fired from separatist-held territory in eastern Ukraine struck a Malaysia Airlines Boeing 777.

Ukrainian president Volodymyr Zelenskiy spoke by telephone with Iranian counterpart Hassan Rouhani on Thursday and said he hoped for his “assistance in conducting a transparent, comprehensive and objective investigation to clarify the circumstances of this tragic event as soon as possible”.