US election: Key trends from how Americans voted in 2020 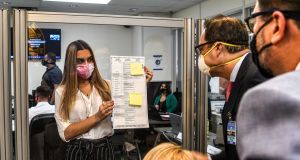 Joe Biden won the US presidential race after Donald Trump lost support among the white voters who carried him to success in 2016, while Americans have become more divided by place and income.

Trump gained ground among the wealthy, while the more educated broke more strongly for the Democrats than in 2016, an early analysis of data from national exit polls and other post-election and election eve surveys shows.

This data is only a preliminary snapshot and comes with some health warnings. Exit polls will be reweighted to reflect final vote tallies, which have been slower to come in this year due to the pandemic. The way exit polls are conducted has changed since 2016, complicating historical comparisons.

Finally, the unprecedented surge in early and mail-in voting may affect the data that has been collected. In order to correct for these issues, the Financial Times has supplemented exit polls with other data sources to confirm trends.

Here are some of the trends the data suggest so far about how Americans voted:

In 2016, Trump’s victory largely hinged on the enthusiasm of white voters without a college degree.

This year, Trump did about as well among this group (63 per cent supported him in both years), but Biden made gains (36 per cent compared with 32 per cent for Hillary Clinton in 2016). The result is a four-point Democratic swing among non-college-educated whites.

White non-college voters are also a diminishing share of the electorate – they made up 44 per cent of eligible voters in 2016. In 2020, demographic shifts reduced that to 41.7 per cent, according to estimates from the Center for American Progress.

In key states such as Michigan and Wisconsin, Biden made his biggest gains, compared with Hillary Clinton in 2016, in counties with a higher share of college-educated white voters.

Other factors could help account for this shift, such as the fact that many counties with highly educated white populations have become more racially diverse over the past four years.

Demography may no longer be destiny

The expectation that the long-term trend towards a more racially diverse America will play in Democrats’ favour looks like it may be oversimplified. Trump made slight inroads with non-white voters this year compared with 2016, though the vast majority still voted for Biden.

The data also suggest level of education is becoming a more important divide, and is clashing with racial identity as a driver of voting patterns. College-educated non-white voters, who favour Democrats, were broadly unchanged in their voting patterns compared with 2016. But non-college-educated minority voters increased their support for Trump from 20 per cent to 25 per cent.

Trump’s relative success with Latino voters, particularly in Florida and Texas, demonstrates the fallacy of treating broad racial groups as blocs. Latinos as a whole voted for Biden by a margin of more than 30 points, but Florida’s anti-socialist Cuban community backed Trump by 55 per cent against 42 for Biden, according to data from the pollster Latino Decisions.

Latino voters shifted towards Trump by about eight percentage points nationally since 2016 according to an average of data from Edison Research, the Associated Press and Latino Decisions, upending expectations that they would desert the Republicans in response to the president’s harsh policies on immigration.

Black voters have also appeared to move very slightly towards Trump, although the 2020 surveys do not agree on how much. This group reliably votes overwhelmingly for Democrats, however, so voter turnout is key here.

Data is not yet available to show whether black turnout played a pivotal role in key states such as Georgia, although almost a million more votes were cast in the state than four years ago, a 21 per cent increase compared with a national rise of 16 per cent.

Trump lost support among low-income voters, but gained with the rich

Voters from wealthy households swung further towards Trump in 2020. Just over half of those whose family income was more than $100,000 a year supported the president, compared with 45 per cent in 2016.

Trump lost ground with older voters, but not with younger ones

In the months leading up to election day, older Americans – who are at greater risk from the virus – showed signs of disapproval towards the president’s handling of the coronavirus pandemic.

The data on younger voters is less robust because they make up a smaller share of the electorate, but on average the numbers suggest that the 18- to 29-year-old group, already heavily Democratic, did not significantly shift towards either party in 2020.

Biden did much better with men, and about the same as Clinton with women

Biden made substantial gains with men, despite some pre-election polls that had pointed to a historic gender gap with men favouring Trump. In the end, some 47 per cent of men supported the Democrat this year, compared with 42 per cent who supported Clinton in 2016.

Among women, however, Biden’s lead improved over Clinton’s by just two points. Academic research published in the years following the 2016 election had suggested sexism played a heightened role in Trump’s success among men, especially among less educated whites.

The exact shifts in voting patterns among different demographics will continue to be debated for months, but one pattern will certainly hold: the growing polarisation of place in American politics.

When Bill Clinton won election to the White House in 1992, two-thirds of votes were cast in counties that were fairly even split between Democrats and Republicans, with the winning party securing less than 60 per cent of the vote. Less than 1 per cent were in ultra-partisan counties where one side won 80 per cent.

Since then, the middle has been steadily hollowed out of American political geography. This year evenly split counties accounted for only about 40 per cent of votes, while one vote in 13 was cast in a deeply red or blue county where supporters of the winning party outnumber their opponents four-to-one or more. – Copyright The Financial Times Limited 2020