Maureen Dowd: Howling at the moon as America dumps Trump 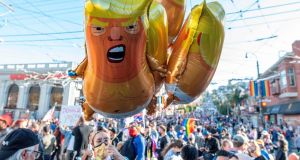 We expected more of Donald Trump. An epic, Jack Nicholson-in-the-Overlook-Hotel meltdown, not just Rose Garden-variety mewling. A conspiracy with grandiosity, not merely pathetic blathering about pointless lawsuits from his entitled children and oddballs Rudy Giuliani and Richard Grenell.

The president has had all this time to hatch a spidery plot to ruin democracy on the way out the door, and this is the best he can come up with? The election has been stolen! What’s your proof? Because I’m losing.

This, from the man who has been hailed as an evil genius of media manipulation? Trump can’t hold a candle to the well-oiled machine – Jeb Bush, Katherine Harris, James Baker and the supreme court – that purloined the Florida vote, and thereby the presidency, for W in 2000.

It was the same old tired Trump routine we’ve watched for four years, right through the pandemic failure: Beat your chest and bleat that you’re king of the world. Then do nothing except screw up.

But you can’t con your way past 74 million Biden ballots any more than you can con your way past a microbe. The masked Americans counting the vote just kept on counting, impervious to the president’s evidence-free conniptions.

Trump campaigned hard and his coattails worked even if a lot of Republican voters were ready to hand him his hat. Even with the Republican National Committee seeking to rake in $60 million to support Trump’s sore-loser piffle, I was getting the distinct impression that many here were not waiting for the final tally. They have happily channel-surfed away from Trump’s egomaniacal bluster.

John Roberts was no doubt relieved that the president’s legal feints were so lame and threadbare that the supreme court would probably not have to do another indefensible Bush v Gore decision to save their benefactor.

Mitch McConnell was certainly savouring the prospect of being the top Republican in town. Trump had served his purpose as a useful tool to get a tax cut and three supreme court picks. Mitch thought he was headed to minority leader, doing his usual obstructionist schtick, but lo and behold he could still be majority leader, controlling the Biden agenda.

Lindsey Graham told Sean Hannity on Thursday night that he would cough up half a mil to the president’s legal defence fund but his heart no longer seemed to be in the lap dog routine. The next day, he was spreading some sunny optimism about bipartisanship in a Biden era. If Joe Biden won, he said, “I’ll give him my input about who I could vote for as secretary of state, attorney general.”

As Trump howled at the moon, denizens of Trumpworld were looking over the horizon, plotting new jobs or book deals. Even the New York Post, which was game to slime Hunter Biden on the eve of the election, started sniping at the Trumps on Twitter: “Downcast Trump makes baseless election fraud claims in White House address” and “Panic-stricken Donald Trump Jr. calls for ‘total war’ in clueless tweet”.

Jared Kushner got in touch with Rupert Murdoch on election night to convey the White House’s white-hot anger over the early Fox News call of Arizona for Biden. But Fox News stood by the call. As Bret Baier calmly asserted, it’s all in the math. (But they couldn’t go all-in – initially Fox brass told talent not to call Biden “president-elect”.)

The president who had managed to superimpose his own reality on the world with startling success was suddenly being yanked into the same reality that the rest of us share. The Superman shirt wasn’t working.

“I think what the president needs to do is, frankly, put his big boy pants on,” said Philadelphia’s Democratic mayor, Jim Kenney.

Biden may not be the most thrilling candidate ever, but there was a real buzz watching the votes come in because our unwieldy, county-by-county system seemed to work. No one was scared by Trump’s protestation.

And I can’t help but be bewitched by Biden’s Cinderfella story. He was knocked out of the ’88 race and couldn’t make a mark in the titanic battle between Hillary and Obama in 2008. He was a loyal vice-president but was ushered out of the arena by President Barack Obama, who thought that the gaffe-prone Uncle Joe had hit his ceiling.

After being cut loose by the first black president, and moving aside for the Clintons’ restoration – something his dying son, Beau, did not want to happen – Biden was revived during the South Carolina primary with the help of Jim Clyburn and black voters. Against Trump, he got a vital boost from black voters in Georgia, thanks in part to all the work Stacey Abrams did. And Biden, friendly with John McCain, got buoyed by Latinos in Arizona.

After accepting in 2015 that he had missed his moment, that he was too white and too old and too male and too befogged by grief over Beau, the soon-to-be 78-year-old has seen his moment come back around. F Scott Fitzgerald was wrong. There are second acts. And what could be more American than that? – New York Times