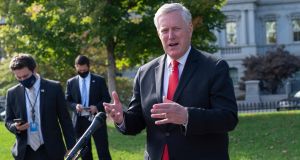 White House chief of staff Mark Meadows speaks to the media at the White House in Washington, DC, in October. Photograph: EPA

Mark Meadows, the White House chief of staff who abided by President Donald Trump’s efforts to play down the coronavirus throughout the summer, has contracted the virus himself, a senior administration official said on Friday night.

Mr Meadows tested positive for the virus Wednesday, the official said, and he told a small group of advisers.

A Trump campaign adviser, Nick Trainer, has also learned he has the virus, a person briefed on his diagnosis said.

Mr Meadows’s diagnosis came as the pandemic rampaged across the United States, averaging more than 100,000 new cases a day over the past week and hitting another record on Friday, with more than 129,000 cases in a single day.

As of Saturday morning, more than 9,830,800 people in the United States had been infected with the coronavirus, and at least 236,500 had died. Mr Meadows is only the latest in a string of people connected to the White House to contract the virus in the past seven weeks, including Mr Trump and the first lady, Melania Trump, a half-dozen aides to the president and five aides to Mr Pence, including his chief of staff, Marc Short.

At least one event at the White House – a celebration of Trump’s nomination of Judge Amy Coney Barrett to the Supreme Court – is suspected of being a superspreader after more than a dozen aides, reporters and guests who attended the event or came into contact with people who were there tested positive for the virus.

That event took place in the Rose Garden and inside the White House. Trump has spent most of the pandemic minimizing the threat of the virus, and several White House officials have nurtured his desire to treat it as a localised threat in Democratic-leaning states. On Tuesday night, Mr Meadows was at Mr Trump’s election party at the White House, which featured several hundred people gathered in the East Room for several hours, many of them not wearing masks as they mingled while watching the election returns.

The president’s chief of staff was also in contact with a coterie of aides earlier in the day at the Trump campaign headquarters in Virginia, crammed into a tight space, where he was not wearing a mask as the president greeted campaign workers.

During the pandemic, Mr Meadows has encouraged Mr Trump’s desire to minimize the threat of the virus and focus instead on the economy. He was dismissive of mask-wearing in the White House and wore one only very sporadically as he travelled with the president or during events in the Oval Office.

In the waning days of the presidential campaign, Mr Meadows made unwanted headlines when he acknowledged during a television interview that the government would not be able “control” the pandemic. Critics and Mr Trump’s political rivals seized on the comment as evidence that the administration had given up on fighting the virus.