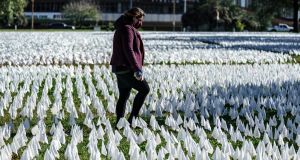 A woman walks among a field of white flags honouring the victims of the Covid-19 pandemic, in Washington. Photograph: J Scott Applewhite/AP Photo

The French government will reimpose an evening curfew on Paris, and possibly the Ile-de-France region around the capital, to tackle worsening Covid-19 figures, government spokesman Gabriel Attal said on Tuesday.

The evening curfew on Paris, which would start at 9pm, would come on top of a new, national lockdown imposed last week by president Emmanuel Macron, Attal said.

“We are going to reinstate a curfew on Paris, and perhaps the Ile-de-France. The Interior Ministry will specify the details later in the day and an edict will be issued,” Mr Attal told BFM TV.

France reported a record 52,518 new Covid-19 cases on Monday and the number hospitalised rose by more than a 1,000 for the fourth time in eight days, as the pandemic shows no signs of abating despite the new lockdown.

Health Minister Olivier Veran told RTL radio that one Parisian was becoming infected with Covid-19 every 30 seconds, while a Parisian is admitted to hospital with the disease every 15 minutes.

Britain, which has the highest official death toll in Europe, is grappling with more than 20,000 new cases a day and scientists have warned the “worst-case” scenario of 80,000 dead could be exceeded.

Greece will impose a two-week lockdown in northern regions and suspend flights, while Italy will tighten restrictions but is holding back from reintroducing a nationwide lockdown as infections, hospital admissions and deaths surge.

The ambulance service in northwest England, one of the areas worst-hit by Covid-19, declared a major incident over an exceptionally high volume of calls, especially in the Greater Manchester area.

The Hungarian government will decide later this week whether to impose new restrictions.

Sweden is set to double the funding allocated to regions for fighting the coronavirus, finance minster Magdalena Andersson said.

A growing number of Russians are unwilling to be inoculated against Covid-19 once a vaccine becomes widely available, a pollster said.

Portuguese president Marcelo Rebelo de Sousa said he was pondering declaring a state of emergency as a preventive measure to fight the spread of the coronavirus at a time when infections are soaring.

Days after a 17-year-old girl tested positive for Covid-19 in a remote part of western China last week, health authorities said they had tested over 4.7 million people in the region.

A small but key UK study found that “cellular immunity” to the virus is present after six months in people who had mild or asymptomatic Covid-19, suggesting some level of protection.

CureVac said its experimental vaccine triggered an immune response in humans, putting it on track to start mass testing this year.

The International Monetary Fund warned G20 economies the crisis was not over, calling on the United States, Britain and other countries to increase the fiscal spending currently planned.

Signs that people are moving away from Tokyo, as telecommuting becomes the norm for many businesses, have put property investors on edge and pushed Japan’s real estate investment trust index to five-month lows. –Reuters