Coronavirus: One-day record of 100,000 cases reported in US 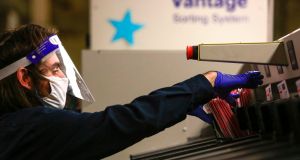 A US election worker wearing a protective visor takes ballots from a sorting machine on Election Day in Renton, Washington on November 3rd, 2020. Photograph: Jason Redmond/AFP via Getty Images

More than 47.9 million people have been reported to be infected by the novel coronavirus globally and 1,222,441 have died, according to a Reuters tally. Infections have been reported in more than 210 countries and territories since the first cases were identified in China in December 2019.

The United States set a one-day record for new coronavirus cases on Wednesday with at least 102,591 new infections, and hospitals in several states reported a rising tide of patients.

Coronavirus patients in US hospitals breached 50,000 on Tuesday, the highest level in nearly three months, as a surge in infections threatens to push the nation’s health care system to the edge of capacity.

Norwegians should avoid travelling within the Nordic country, prime minister Erna Solberg said on Thursday, as part of a fresh round of recommendations and restrictions aimed at stopping the spread of coronavirus.

The number of cases has risen in many parts of Norway with last week’s number setting a new record in infections in a country which long had one of Europe’s lowest rate of infections.

“We now see a sharp increase in the number of people testing positive. The situation is very serious, and ... we don’t have time to wait and see if the measures we introduced last week are enough,” Ms Solberg told parliament.

Norwegians are urged to stay at home as much as possible in the coming weeks and to limit their social interactions, and bars across the country now have to close at midnight.

Last week, Norway tightened restrictions on gatherings and foreign workers entering the country after a rise in coronavirus infections.

Norway recorded a revised 3,118 new Covid-19 cases last week, up from 1,718 the week before - both higher than the previous peak of 1,733 cases posted in the week March 16-22, according to data from the Norwegian Institute of Public Health.

Paris will be placed under more restrictions to curb the worsening Covid-19 pandemic, including a requirement for more shops to close in the evening, Paris mayor Anne Hidalgo told BFM TV on Thursday.

Ms Hidalgo said this would entail shutting down certain shops selling takeaway food and drink at 10pm local time, which would come on top of the existing national lockdown that has been imposed throughout France.

President Emmanuel Macron imposed a new lockdown last month, forcing non-essential shops - such as those not selling basic foods or medicines - to close, and making people use signed documents to justify being out on the streets.

Nevertheless, French authorities believed more measures were needed in Paris as they felt there were still too many people out in the capital late at night, in spite of the lockdown.

New Covid-19 lockdowns and curbs have stirred resistance across Europe even as countries including France and Spain deal with record daily infections and hospitals under pressure.

A French government source told Reuters this week that they had noted in Paris “clandestine parties, raves, private dinners”, and felt stricter measures were needed.

“When you get people who are not playing by the rules of the game, and are therefore putting at risk the health of a large number of people, that is when you need to put in place new restrictions,” Ms Hidalgo said.

The Kremlin said on Thursday that the coronavirus situation in Russia was alarming, but that it was nonetheless still under control.

Kremlin spokesman Dmitry Peskov said it was impossible to give accurate forecasts on the situation.

Daily new coronavirus infections hit a record high in Germany on Thursday as data showed shoppers had stocked up on toilet paper, hand sanitiser and baking ingredients ahead of new lockdown measures that took effect this week.

The number of confirmed coronavirus cases increased by 19,990 to 596,583, data from the Robert Koch Institute for infectious diseases showed on Thursday.

The Statistics Office said rising coronavirus cases and the new partial lockdown, which took effect from November 2nd, had increased the demand for some hygiene articles and foodstuffs in the second half of October.

Sales of toilet paper in the week beginning October 19th were 139 per cent above the average for the pre-crisis months of August 2019 to January 2020, the Statistics Office said.

Purchases of disinfectant have risen continuously in recent weeks and were up 104 per cent over pre-crisis levels in the last week of October, but remained lower than during the first lockdown in spring, when sales at times increased almost eight-fold.

Total cases rose to 378,716 in the country of 10.7 million, which has seen one of Europe’s highest infection rates amid a second wave of the pandemic.

The ministry also reported 220 new deaths, including 123 on Wednesday along with revisions to previous days, to bring the total to 4,133.

A record 9,850 new Covid-19 cases were recorded in the past 24 hours in Ukraine, the health minister said on Thursday, up from a high of 9,524 reported a day earlier.

India reported a daily jump of 50,210 coronavirus infections, taking its total to 8.36 million, the health ministry said on Thursday.

This was the highest daily jump in cases since October 25th, according to a Reuters tally. Cases in India have been dipping since hitting a peak in September, but experts warn that the Diwali festival season could lead to a spike.