As president-elect, Biden moves to put together transition team and looks to advisers 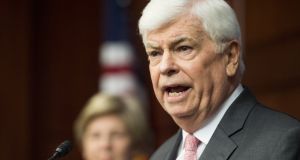 Chris Dodd: close adviser to Joe Biden during the 2020 presidential campaign is favourite to become the next US ambassador to Ireland. Photograph: Bill Clark/CQ Roll Call

Former senator Chris Dodd is emerging as the favourite to become the next ambassador to Ireland, as Joe Biden is poised to become the 46th president of the United States, The Irish Times understands.

Mr Dodd, who is a close adviser to the president-elect, is the frontrunner for the position, which is currently occupied by Ed Crawford, Donald Trump’s nominee and a strong Trump supporter.

Mr Dodd was elected as senator for Connecticut in 1980, and served for 30 years in the chamber, coinciding with Mr Biden’s time as a senator. Prior to that he represented Connecticut in the House of Representatives.

He briefly ran for president in 2008, sharing a campaign plane to a debate with his friend and rival Mr Biden, who was also running for the Democratic nomination, though neither made it through the primary stage.

He has been a close adviser to Mr Biden during the 2020 presidential campaign. In particular, he chaired a committee established to choose the former vice-president’s running mate, culminating in the selection of Kamala Harris.

A proud Irish-American, Mr Dodd has a home in the west of Ireland and was a member of the Friends of Ireland caucus on Capitol Hill when he served in Congress. All of his great-grandparents were born in Ireland.

Other possible names under consideration include former ambassador to Portugal Elizabeth Frawley Bagley and Anne Finucane, vice-chair of Bank of America. Mr Biden’s sister, Valerie, a close adviser to the president-elect who regularly speaks with pride about the family’s Irish heritage, could also be appointed, according to sources close to the Biden campaign.

While ambassadors in the United States are often political appointments, they must be confirmed by the Senate.

Meanwhile as Mr Biden prepares to become the next president he is assembling a transition team.

Among the names mentioned as Mr Biden considers individuals for positions is Pennsylvania congressman Brendan Boyle, a prominent Irish-American on the Hill.

The New York Times this weekend reported that 43-year-old Mr Boyle could be in line for a position in the administration, noting that he was an early supporter of Mr Biden’s bid for the presidency.

Speaking while campaigning with Mr Boyle in Philadelphia last week, the former vice-president remarked: “We have an expression where I come from: You never forget those who brung you to the dance.”

Mr Biden is expected to name a coronavirus task force as early as Monday. A decision on cabinet members will be made later in the month, however.

The coronavirus team will be co-chaired by the former surgeon general during the Obama administration, Vivek Murthy, and former Food and Drug Administration commissioner David Kessler, and is an indication of Mr Biden’s intention to prioritise formulating a strategy for the coronavirus pandemic.

Given his long history in Washington, Mr Biden has a wide pool of informal advisers and allies who have been working closely with him in recent months.

Among those who could be in line for secretary of state are Anthony Blinken, Jake Sullivan and Nicholas Burns. Mr Biden has indicated that he wants to appoint a diverse cabinet, representative of America’s population.

Senator Elizabeth Warren has made it known she is interested in a post. There were rumours she could be appointed as treasury secretary – a move that would indicate Mr Biden’s embrace of a more left-wing politics.

Mr Biden’s campaign and transition team includes many Irish-Americans. These include Mr Sullivan, Mike Donilon, former congressional chief of staff John McCarthy and Jennifer O’Malley Dillon. The  president-elect’s campaign manager is an Irish-American from Boston who is a board member of the Washington Ireland Programme.