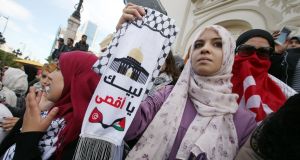 Tunisians take part in a protest in Tunis on Thursday against US president Donald Trump’s decision to recognise Jerusalem as Israel’s capital. Photograph: Mohamed Messara/ EPA

For decades, the idea of a Palestinian state with Jerusalem as its capital served as a rare and powerful rallying cry that united the Arab world. Kings and dictators stumped for it, priests and imams prayed for it, jihadis and protesters died for it, and militant groups and political parties campaigned for it – naming their television stations, boulevards and even themselves, after Al-Quds, the Arabic name for the holy city.

In officially recognising Jerusalem as the capital of Israel on Wednesday, US president Donald Trump struck what many considered the death blow to those aspirations, handing a major victory to Israel in the perennial struggle between Jews and Arabs for control of the Holy Land.

But as Arab and Muslim leaders raised their voices to condemn the move, many across the Middle East wondered if so much had changed in recent years that the real Arab response would amount to little more than a whimper.

“‘Jerusalem is the capital of Palestine’ joins ‘Palestinian refugees are going back home one day’ in the let’s-hope-it-will-happen-but-it-never-will department,” Mustapha Hamoui, a Lebanese blogger, wrote in a rueful tweet.

While Arab leaders have continued to pay lip service to the Palestinian cause, it has slipped in importance, displaced by the Arab Spring uprisings, the wars in Iraq, Syria and Yemen, the threat of the Islamic State, and the contest between Saudi Arabia and Iran for regional dominance. Persian Gulf states like Saudi Arabia, more concerned about their rivalry with Iran, have found their interests increasingly overlapping with those of Israel.

Arab leaders have often counted on declarations of support for the Palestinian cause as a reliable way to appeal to their people, and sometimes as a distraction from domestic problems, including lack of political freedoms and economic opportunities.

But while the passion for the Palestinian cause among many Arabs was genuine, those in power often exploited it for their own aims. When Hizbullah, the Lebanese militia and political party formed to fight Israel, sent fighters to help save President Bashar al-Assad of Syria, its leader, Hassan Nasrallah, claimed in a speech that “the road to Jerusalem” went through a list of Syrian cities, including Aleppo.

Critics posted maps on social media showing that was only true if you took a particularly circuitous route. Palestinian leaders have learned that declarations of concrete support from their Arab brothers only sometimes materialised. And many note that the Arab world has done little more than issue notes of protest as the Israeli government has extended its de facto control over the eastern part of Jerusalem since seizing it from Jordan in the 1967 Mideast war and annexing it in a move still not recognised by most of the world.

The Palestinians’ Arab defenders have meanwhile shifted their own priorities. Egypt, for instance, was once a reliable font of pro-Palestinian anger, where protests against Israel regularly erupted in the 1990s and 2000s. But years of harsh repression under President Abdel-Fattah al-Sisi, combined with broader anxiety over regional stability, have curtailed public protests.

"Jerusalem is the capital of Palestine" joins "Palestinian refugees are going back home one day" in the let's-hope-it-will-happen-but-it-never-will department https://t.co/n2aDsB14y9

“People still care about the Palestine issue,” said Hossam Bahgat, a prominent journalist. “But the proverbial Arab Street has been forcibly disappeared,” he added, referring to a rash of illegal abductions of government critics since the military brought el-Sissi to power in 2013.

As Damascus, Cairo and Baghdad – three traditional centres of Arab power – have weakened, Saudi Arabia has sought to assert itself. While its royals and monarchs once spoke frequently of the Palestinian cause, Crown Prince Mohammed bin Salman (32), who effectively rules the country, has barely addressed the issue in public. He confided to foreign visitors this year that he does not consider the conflict a priority compared with confronting Iran and pursuing domestic reforms.

Sisi and King Salman of Saudi Arabia are among Trump’s biggest boosters in the Arab world. At a summit in Riyadh, Saudi Arabia, in May, the three leaders stood together over a glowing orb for a photo that appeared to cement their alliance, even as it inspired a rash of mocking internet memes.

In September, Sisi met for the first time in public with the Israeli prime minister, Binyamin Netanyahu, lending smiling optics to a relationship that had been quietly blossoming, largely over security issues, for several years. And Saudi Arabia is widely believed to be expanding covert intelligence cooperation with Israel.

But Trump’s decision on Jerusalem has put his allies in the uncomfortable position of having to turn on him, at least verbally. King Salman called the US move “a dangerous step likely to inflame the passions of Muslims around the world”.

Sisi’s office said that he had spoken with the president of the Palestinian Authority, Mahmoud Abbas, and that both men lamented a decision that “overlooks the special position of Jerusalem for Arabs and Muslims”. Egypt’s state-controlled Al-Ahram website went with the headline: “Jerusalem is the capital of the Palestinian state despite Trump’s decision.”

King Abdullah II of Jordan, another US ally, said the decision would have “dangerous repercussions on the stability and security of the region”. Outside the Arab world, Turkish President Recep Tayyip Erdogan called Jerusalem “ a red line for Muslims” and threatened to cut off relations with Israel.

“This is the new adventure of global arrogance in the region,” said President Hassan Rouhani of Iran. It was still possible that Trump’s declaration could have the effect of moving the Palestinian issue to the front burner, but on Wednesday, the emotions were as much of sadness and resignation as of anger and threats. An explosion of violence could still come, but so far there is something more like an explosion of sighs.

Nohad Machnouk, the interior minister of Lebanon, tweeted a clip from a song by Fairouz, the Lebanese diva – “Our home is ours, Jerusalem is ours, and with our hands we will return it to its glory” – the words determined but the music wistful and nostalgic.

In some ways, the move is symbolic and only confirms the grim view of the Palestinian future. People in the region have long been seen the United States as deeply biased toward Israel and the hopes for a viable Palestinian state as fading.

But the US declaration casts into doubt the most important Palestinian hope that was still seen as achievable: a capital in East Jerusalem. Calling Jerusalem the Israeli capital without acknowledging its significance to Arabs comes off to them as a denial of the Muslim and Arab perspective, analysts said.

“For Palestinians, Arabs and Muslims, it has the same effect that denial of Jewish claims to Jerusalem has to Jews,” said Barnett R Rubin, a former senior State Department adviser. Moreover, he said, the move “confirms the narrative that the US is at war with Islam and has no respect for Muslim and Arab perspectives.”

That perception is likely to damage the standing of the United States in the region. “This will do tremendous damage to America’s image and interests in the region,” said Nabil Fahmy, a former foreign minister of Egypt. Of Trump, he added, “He is playing into the hands of the extremists and giving easy ammunition to extremists and terrorists.”

The move could also strengthen Iran, giving it back the mantle of resistance it lost when it sided with Syria’s government against an uprising. The elite force of Iran’s Revolutionary Guards, led by Qasim Souleimani, is called the Quds Force, named for Jerusalem. “We just handed him a claim to lead the cause,” Rubin said.

The focus on Jerusalem may also provide fresh ammunition to violent extremists in the region. The Islamic State terror group’s powerful affiliate in Egypt was born from the militant group Ansar Beit al-Maqdis, whose name translates as “Supporters of Jerusalem”.

But for many, outrage at Trump’s actions mixed with a sense of weary resignation. “We’ll see token protests and criticism from some countries,” Nadia Mohamed, a Twitter user from Misrata, Libya, wrote. “The media will make noise and then it will soon be over.” – New York Times