Move in retaliation for US action against RT, Russia’s English-language news service 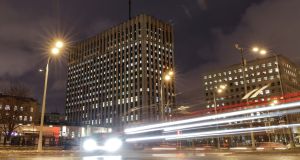 The move reflects rising tensions over alleged Kremlin interference in the 2016 US presidential election and had been widely anticipated.

Russia’s ministry of justice published a list of nine media organisations designated foreign agents, including Voice of America and Radio Free Europe/Radio Liberty, on its website early on Tuesday morning. Various affiliates of RFE/RL that report on the Russian regions of the Caucasus, Siberia, Tatarstan and Bashkortostan, as well as Ukraine’s Crimea, were also designated as “media fulfilling the functions of a foreign agent”.

In the past Russia’s “foreign agent” law has been mainly used to target non-governmental organisations receiving international funding or deemed to be engaged in anti-Kremlin political activities. Amendments broadening the legislation to cover foreign media were rushed through the Russian parliament late last month, receiving overwhelming support from voting deputies.

Russia introduced the new rules after the US department of justice invoked a law of 1938 to force RT to register as a foreign agent, saying the Russian-funded news organisation had acted as a propaganda tool to push the Kremlin’s agenda in the 2016 US presidential election.

Russia denies it interfered in the election campaign and claims the US political establishment is beset with anti-Russian hysteria. The US Congress has withdrawn RT’s press accreditation, stripping the organisation of the right to attend events in the Senate and House of Representatives.

Tuesday’s Russian justice ministry statement did not mention any restrictions to be placed on media organisations tagged as foreign agents. However, Russian lawmakers have said that such media could be required to submit detailed financial reports to the authorities and label published materials as the product of a foreign agent.

Both houses of the Russian parliament said this week they would consider legislation that, like the US Congress ban on RT, would prevent foreign agent media from attending sessions on their premises.

Senator Andrei Klimov, a member of the foreign affairs committee in the Soviet Federation, the upper house of the Russian parliament, said on Tuesday that lawmakers had no immediate plans to add to the list of media outlets designated foreign agents. “Our measures were absolutely a mirror image response to US pressure on Russian media. If nothing new happens on that side, we won’t have any grounds to broaden the list.”

Thomas Kent, the president of RFE/RL, said the broadcaster was aware of the Russian ministry of justice’s announcement, but had “received no details of what this designation may mean for us”.

“We remain committed to continuing our journalistic work in the interests of providing accurate and objective news to our Russian-speaking audiences,” he added in a written statement published on Tuesday.