‘It’s as if Paris lost the Eiffel Tower,’ one politician said after the rock star’s death 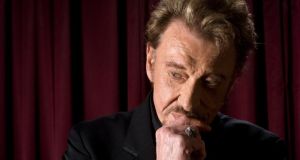 “All of us have something of Johnny Hallyday in us,” President Emmanuel Macron began his homage to France’s greatest rock star. His remark, early on Wednesday, was a play on one of Hallyday’s best-known titles, Quelque chose de Tennessee (Something of Tennessee).

Through six decades and the sale of 110 million records, the 74-year-old singer secured an unparalleled place in French affections. By early afternoon his name had appeared two million times on social media, most often associated with the word “legend”.

Hallyday’s widow, Laeticia, telephoned Macron from the couple’s home outside Paris at 2am, before she called Agence France-Presse. On a visit to Algiers, Macron later called Hallyday a hero, adding, “We thought he was invincible.”

“This morning it’s as if Paris lost the Eiffel Tower,” said the former Socialist presidential candidate Benoît Hamon. “France has lost a national monument of song, rock and popular culture.”

He was born of a Belgian father, had an American pseudonym, lived between Switzerland and California, and yet he was the most French of artistes

There is talk of a national homage, perhaps a ceremony at Les Invalides, flags at half-mast or a funeral march down the Champs-Élysées. A petition was launched to make December 6th a national holiday in honour of Hallyday. RTL, France’s most popular radio station, rechristened itself Radio Johnny for the day. The TF1, France 2 and M6 television networks scrapped their scheduled programmes to broadcast tributes to Hallyday on Wednesday night.

The theme that Hallyday somehow represented France ran through the outpouring. “He was born of a Belgian father, had an American pseudonym, lived between Switzerland and California, and yet he was the most French of artistes, said Alexis Brézet, editor of the newspaper Le Figaro. “Johnny was French to the tip of his cowboy boots.”

If there is such a thing as national character, Hallyday embodied it. He was moody, surly, sentimental, tormented, excessive and love-obsessed. As Macron’s homage said, “He was the bad boy who sang of love, the sentimental rocker . . . the tender heart who went from conquests to break-ups. We suffered and loved with him.”

Hallyday’s ravaged face, leather trousers, tattoos, biker jewellery and gravelly voice nurtured on Gauloise cigarettes were part of a unique persona. Paris Match magazine chronicled his repeated marriages and four children. He spoke openly of his depression and use of cocaine.

Hallyday was a rebel who supported the right, from Valéry Giscard d’Estaing to Jacques Chirac and Nicolas Sarkozy. Yet he once sang at the communist Fête de l’Humanité. Hallyday was, the former communist leader Robert Hue said, “in sync with the people”.

Hallyday was living proof that France was not all highfalutin intellectualism, that popular culture thrives there too. Friendship with “Johnny” endowed politicians with the common touch. Intellectuals, including the film-maker Jean-Luc Godard and the writers Marguerite Duras and Françoise Sagan, were fascinated by him, “doubtless because he had what they never did: the almost supernatural ability to establish wordless communication with his public”, Brézet said.

Hallyday symbolised “France that had wanted to be America”, according to France Inter radio. His real name was Jean-Philippe Smet. His Aunt Hélène’s American husband nicknamed him Johnny, and he later took the American cousins’ name “Halliday” as his stage name, but it was misspelt “Hallyday” on his first single, in 1960, and he kept the misspelling.

From the beginning Hallyday dreamed of the United States. At 10 he sang The Ballad of Davy Crockett wearing a fringed cowboy suit sent from the US. He cultivated a physical resemblance to James Dean and was introduced as “Franco-American” on television. His first million-record hit, Viens danser le twist, was a version of Chubby Checker’s Let’s Twist Again.

The New York Times called Hallyday “the Elvis Presley of France,” a title he regaled in. No one in France sang rock’n’roll before Hallyday. His early adaptations of Presley sparked riots in Paris. If French youth had so much energy, President Charles de Gaulle said in 1963, they ought to build roadworks. Hallyday provided the first whiff of the sexual and cultural revolution that would break over France with the May 1968 revolution.

To Americans and Britons, the sight of the ageing rock star, imitating Elvis as he gyrated on stage after two hip replacements, was a grotesque parody

France, it seemed, loved les Anglo-Saxons as filtered through Hallyday. He later adapted songs by The Beatles, Otis Redding, Bob Dylan and Ike and Tina Turner. He was a chameleon who stirred rhythm and blues, country, jazz and crooner styles into his rock. His concerts filled the Parc des Princes, Stade de France and Champs de Mars. When France held a memorial to the victims of the Charlie Hebdo and Hyper Cacher massacres, in January 2015, “Johnny” was invited to sing there.

Les Anglo-Saxons did not not reciprocate. USA Today called Hallyday the greatest rock star you never heard of. To Americans and Britons, the sight of the ageing rock star, imitating Elvis as he gyrated on stage after two hip replacements, was a grotesque parody. His enduring popularity was a uniquely French mystery.