Yemen war doomed to drag on after former president killed 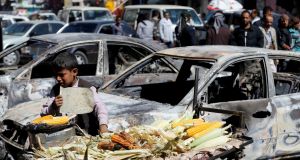 The death on Monday of former Yemeni president Ali Abdullah Saleh at the hands of rebel Houthis, his former allies, torpedoes efforts to end the disastrous war in Yemen.

After months of procrastination, Saleh, who ruled Yemen for 33 years, switched sides during fierce clashes between his armed followers and Houthi fighters in the capital Sana’a.

Shortly after Saleh was killed, the Houthis consolidated their grip on the city and shouted defiance at Saudi Arabia, which has waged war on them since March 2015. In response Saudi war planes bombed Sana’a, and the Riyadh-backed Yemeni president Abd-Rabbu Mansour Hadi called on loyalists, based 50km outside Sana’a, to advance towards the city, escalating the conflict.

In the short term, violence can be expected to intensify. Saleh had retained considerable support in the army and among tribesmen up until he was killed. The Saudis had hoped an alliance with him lent enough local legitimacy and decisive military muscle to win the stalled 2½-year-old war.

While it is early to predict how Saleh’s followers will react to his death, Houthi leader Abdul Malik al-Houthi appealed to Saleh’s party and fighters not to shift to the Saudi side.

In the long term, such a shift could weaken the Houthis, who remain committed to the war against the hated “outsiders” while the Sunni Saudis and their allies are equally determined to carry on with the conflict as they contend the Houthis are proxies of Shia Iran, which is regarded by Riyadh as its chief rival for influence in the region.

The Saudis had hoped Saleh – who once managed Yemen’s diverse tribes and had united north and south – would prevent the country from slipping deeper into political chaos. Without Saleh, the Saudis, who hold the south, will find great difficulty extending their control over the rebellious north, the most populous region in the country.

Saleh switched sides because he believed Riyadh would drop Hadi – whom the Saudis now consider ineffectual – and restore Saleh to the presidency from which he had resigned in 2012 following the Arab Spring uprisings and under pressure from the international community.

The ill-advised conflict was launched in March 2015 by Saudi defence minister and now crown prince Mohammed bin Salman, who sought to restore Hadi after he had fled the country following the seizure by the Houthis of vast swathes of territory.

The Saudis expected a quick and easy victory, relying on air power and limited deployment of ground forces. When the war reached a stalemate after a few months, the Saudis sealed off ports serving Houthi-held areas, denying food, medicine and other essential supplies to the people living under rebel control, leading to starvation and disease.

Both sides have ignored the suffering of civilians and refused to reach a settlement in UN-mediated talks, trapping the 28 million Yemenis in an endless conflict and political-economic disaster.

At least 14,000 have been killed and three million driven from their homes. One million have contracted cholera, and 18 million face famine due to the Saudi blockade and degradation of the country’s infrastructure.