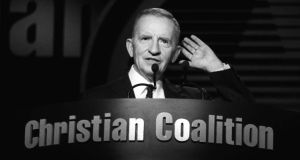 H Ross Perot, the feisty Texas technology billionaire who rattled US politics with two independent presidential campaigns in the 1990s that struck a chord with disgruntled voters, died on Tuesday at the age of 89, his family said.

“Ross Perot, the ground-breaking businessman and loving husband, brother, father and grandfather, passed away early Tuesday at his home in Dallas, surrounded by his devoted family,” the Perot family said in a statement. A family spokesman said leukemia was the cause of death.

Perot was a natural salesman who made a fortune in computer services but he was an unlikely and unconventional politician. He was short with buzz-top haircut, spoke with a folksy Texas drawl and had protruding ears that even he joked about. He was blunt and assertive and his success in business made him accustomed to getting his way.

Perot was so gung-ho that when two of his employees were jailed in Iran in 1978, he organised a team of commandos from his employees and hired a former Green Beret colonel to break them out.

Perot leaped into the 1992 presidential race as an independent and quickly found a lode of Americans turned off by the Republican and Democratic parties. His overarching issue was curbing the government’s deficit spending – an issue he referred to as the “crazy aunt in the basement” who no one wanted to talk about.

His outsider campaign, much of it financed by his own money, featured 30-minute television “infomercials”. With his charts, self-deprecating humour and down-home economic remedies, Perot led a Gallup poll five months before the election with 39 per cent, compared to 31 per cent for incumbent Republican George HW Bush and 25 per cent for Democrat Bill Clinton.

A month later, however, Perot stunned the political world by withdrawing from the race. He re-entered several weeks later saying he had dropped out because Republican tricksters had been plotting to disrupt his daughter’s wedding.

Perot finished with a respectable 19 per cent of the vote in the presidential election, trailing Clinton’s 43 per cent and Bush’s 37.5 per cent.

Perot stayed active in politics by speaking out against the North American Free Trade Agreement, saying it would create a “giant sucking sound” of American jobs going to Mexico.

For his 1996 White House run, Perot started the Reform Party but captured little more than 8 per cent of the popular vote, as well as causing a rift in the political movement he founded.

Many voters said they had come to perceive Perot as overbearing, volatile, paranoid and egotistical – even if they had liked his ideas.

By 2000, Perot had mostly faded from the national political radar.

Henry Ross Perot was born on June 27th, 1930, in Texarkana, Texas, and raised in the height of the Depression. He graduated in 1953 from the US Naval Academy, where he first learned about computers.

After his naval service, Perot joined IBM as a computer salesman in 1957 and quickly made a reputation for himself. In 1962 he met his yearly sales quota by January 19th.

Disenchanted that his bosses did not like his ideas, Perot started his own company, Electronic Data Systems Inc in Dallas, a move that would make him a billionaire by age 38 by handling data processing for customers such as the Medicare system, Nasa and other government entities.

When General Motors bought controlling interest in EDS in 1984, Perot became the largest single shareholder of the world’s largest corporation. But he quickly clashed with top GM officials and two years later was paid $900 million to quit the GM board and relinquish control of EDS.

In 1988 Perot started another data company, Perot Systems Corp. He took time off from the company for his political forays but when he returned to it in 1998 he saw the company’s profits nearly quadruple and long-term debt slashed by about half. He turned the company over to son Ross Jr and Dell bought it in 2009 for $3.9 billion.

Perot said he liked to hire military veterans, especially those with combat experience, because of their leadership ability and ability to deal with pressure. American prisoners of war and those listed as missing in action in the Vietnam War became a key issue for Perot and he made several trips to Vietnam on their behalf.

At the Perot Systems headquarters he kept mementoes, including his childhood bicycle and a walking stick believed to have belonged to al-Qaeda leader Osama bin Laden.

One section of the building was dedicated to the rescue of two EDS workers imprisoned in Tehran on suspicion of bribery before the shah of Iran was overthrown in 1978. According to the non-fiction book On Wings of Eagles by Ken Follett, an Iranian EDS employee helped lead a revolutionary mob’s attack on the prison, allowing the EDS employees to escape.

They were then sneaked out of the country, along with other EDS employees.

Perot’s survivors include his wife, Margot, who he married in 1956. They had five children. – Reuters