UAE to cut troop numbers for ‘peace-first’ strategy in Yemen 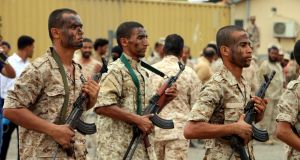 An unidentified senior Emirati official said on Tuesday that the decision to reduce troop numbers was “tactical”, notably in the western Red Sea port city of Hodeidah and the southern port of Aden. The UAE denies the redeployments are related to rising tensions between the US and Iran.

Rebel leader Mohammed Ali al-Houthi responded to the UAE initiative by calling full Emirati and Saudi withdrawal from Yemen “the ideal decision that must be taken at this time”.

The Emirati source did not say whether the UAE would continue backing local militia allies. Although he said the Emirates would support Saudi-sponsored Yemeni president Abu Rabbu Mansour Hadi, the UAE had already shifted to backing the Southern Traditional Council, the political wing of the southern separatist movement. While the UAE aims to dominate Yemen’s south, the Saudis seek to crush Houthi rebels in the north.

The UAE disagrees with Saudi Arabia’s conduct of the campaign. Victory over theHouthi rebels was expected within months but the war has stalemated and the Houthis have been mounting strikes on Saudi Arabia and shipping off the coast of the Emirates.

The adoption of a “peace-first strategy” by the UAE is hardly surprising. The war has long been unpopular domestically. Emiratis fear for the lives and limbs of their troops and see resources consumed by an endless conflict instead of propping up the faltering UAE economy.

It is not clear how the Saudis will respond to the UAE’s change of stance. Having joined the Saudis in waging war on Yemen, Abu Dhabi’s crown prince and effective ruler Mohammed bin Zayed (58) has ordered the transition to a peace strategy.

He mentored his Saudi counterpart Mohammed bin Salman (33) after he assumed power in January 2015, but Bin Salman has since gone his own way.

Since then, however, he has steered the kingdom and its allies along a reckless course in Yemen, inaugurated limited domestic reforms, and cracked down on dissent. He stands accused of ordering the murder in Istanbul of Saudi journalist Jamal Khashoggi in October 2018.

For Saudi Arabia and the UAE, the Yemen war has been an expensive military failure and public relations disaster. They are blamed for fighting which, UN experts predict, will have killed 102,000 people between March 2015 and the end of 2019.

An additional 131,000 deaths will have resulted from disease and starvation. The charity Save the Children has reported 440,000 cases of cholera so far this year.

Images of some of the country’s 203,000 afflicted children are circulated around the world by satellite television channels, inflaming opinion against the war and its perpetrators.

As the UAE’s business, tourist and air traffic hub, Dubai is seriously concerned about both negative publicity and possible Houthi mortar attacks on its territory.

Dubai is expecting 25 million visitors to flock to World Expo 2020, a six-month extravaganza beginning in October which, the International Monetary Fund says, could boost Dubai’s GDP.

The UAE’s decision to opt for peace will weaken Saudi Arabia, which has focused on the air campaign while Emirati troops and allies have fought on the ground. Saudi Arabia could, reluctantly, have to accept that UN-mediated talks with the Houthis are the only way to exit the war.