The Ebola body collectors hoping to save their communities

Beni Letter: Those involved in burying victims of the disease face high degree of risk 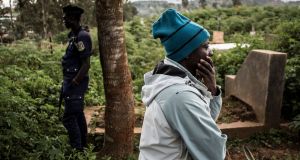 A family member reacts during the burial of a victim of the Ebola virus in Butembo, Democratic Republic of the Congo. Photograph: John Wessels/AFP/Getty Images

Cléophas Kasereka Vyavuwa (41) is used to putting on protective gear now. He carefully dresses in boots, gloves, a body suit, a face mask and a head covering almost every day, to assist with as many as 15 high-risk burials.

Vyavuwa’s home city, Beni, is one of the parts of eastern Democratic Republic of the Congo (DRC) currently experiencing the second worst Ebola outbreak in recorded history. Since last August, more than 1,600 people have died from the virus.

While Ebola’s symptoms include a high fever, headaches, muscle pain and bleeding from orifices, deaths are usually caused by organ failure and extreme dehydration.

Despite their concerns about contracting Ebola, Congolese people from many different backgrounds are stepping up to help with the medical response – in which funerals are the most dangerous part of all.

As Ebola’s viral load passes through fluids and increases the longer a person has it, the bodies of victims are incredibly dangerous. They need to be buried in a safe way without family members touching them – which can be hard for relatives to accept.

Vyavuwa worked with a road construction company before signing up with the Red Cross when the Ebola outbreak began 11 months ago. He said he’s just doing his duty.

“As a community member and a volunteer, I’m protecting my community. If I don’t do this, diseases could spread, and maybe more people could die,” Vyavuwa says.

Two-thirds of people who contract Ebola die from it, and at least 40 healthcare workers have been among the victims.

“This is the first time Ebola has reached our community, so it’s new to [people],” Vyavuwa explains. “A lot of people do not accept that Ebola exists. They sometimes insult us, they throw stones. We are scared that some of us could get hurt.”

Burial workers have been targeted and injured. In one incident, armed security shot at attackers in retaliation, and mourners were killed.

There are many rumours in eastern DRC, including that Ebola has been brought by foreign aid workers, that people who die have their organs harvested, and that some are being killed on purpose. Complicating the situation is the fractious nature of society: dozens of armed groups operate in the region. Vyavuwa says it’s better to have someone like him present, a local who can speak to people in a way they understand.

“You can’t just go in and conduct the burial. We go to the family and we explain to them why we’re there . . . Only once the family has accepted, we can then continue.”

Vyavuwa says that when the outbreak ends he wants to continue fighting disease. However, going from my experience reporting in Liberia, it can be difficult for locals who have risked their lives once a crisis is declared over and international funding runs out.

Nearly 5,000 people died from Ebola in Liberia between 2014 and 2016. Last year, I travelled there to report on the healthcare system in the aftermath.

I visited West Point, a coastal township in the capital city Monrovia that was quarantined in 2014 to stop Ebola spreading, with security people meeting residents who tried to leave with tear gas and guns.

Walking on the beach, four years later, we spotted waves crashing beside a corpse.

As children played nearby, ignoring it, a friend of the dead man ran up to tell us the 29-year-old man had gone mad during a fever and drowned himself in the sea that morning. Moving the body to a burial place was too expensive, at $50, so he’d lie there for three days until the government came to collect him.

Though I was shocked, residents said it’s not uncommon to see abandoned bodies lying on the street, in full view of those passing by.

“The society became accustomed to us going to get the bodies,” explained Jefferson Dahlo, a 36-year-old healthcare worker and former Ebola body collector.

Dahlo said there was no longer a fixed budget for body disposal management – or “BDM”, as he coined it.

He brought me to Disco Hill, the only government-run cemetery, which was operating on one-10th of the staff it employed during Ebola. Management told me they were running out of space, and didn’t have funding to buy more land.

For people like Dahlo, who were lauded during Liberia’s Ebola crisis for their courage and dedication to public service, it has been difficult to witness ongoing problems without international interest and resources to tackle them.

Ebola decimated the country’s health system, and diseases like tuberculosis are common, but slower killers than Ebola was. “We are trying, but with some challenges. I am still hoping for the best,” Dahlo said.