Trump ‘warned of consequences’ of moving embassy to Jerusalem 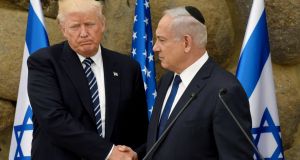 US President Donald Trump with Israeli president Binyamin Netanyahu: Since 1995, when Congress passed a Bill calling for the US embassy to be relocated, US presidents have issued a waiver every six months claiming that the embassy should remain in Tel Aviv because of national security interests. File photograph: Debbie Hill/EPA

US president Donald Trump is due to deliver a key speech on Israel on Wednesday amid growing signs that the Trump administration is preparing to move the American embassy in Israel from Tel Aviv to Jerusalem.

Mr Trump informed the leader of the Palestinian Authority and other Muslim leaders of his intention to move the embassy in a series of phone calls on Tuesday, reports said, with the president scheduled to deliver remarks on the matter on Wednesday.

However, even if Mr Trump announces a decision to recognise Jerusalem as the Israeli capital, he could delay moving the embassy.

Any move to switch the US mission to Jerusalem would reverse decades of US Middle East policy and risk sparking violence in the region.

While every president since Bill Clinton has signed the waiver as a matter of course, Mr Trump indicated during the presidential campaign that he would consider moving the embassy to Jerusalem

The historic city is claimed by both Israel and the Palestinian people as their capital.

Since 1995, when Congress passed a Bill calling for the US embassy to be relocated, US presidents have issued a waiver every six months claiming that the embassy should remain in Tel Aviv because of national security interests.

While every president since Bill Clinton has signed the waiver as a matter of course, Mr Trump indicated during the presidential campaign that he would consider moving the embassy to Jerusalem.

One possibility is that Mr Trump could sign the waiver, giving him at least six months leeway before a final decision is made. The deadline for the issuance of the later waiver passed on Monday, sparking expectations of an imminent announcement.

Addressing reporters at the White House, press secretary Sarah Huckabee Sanders confirmed that Mr Trump would make remarks on the issue on Wednesday. Asked if the president had already made a decision on the issue, Ms Sanders said he was “pretty solid in his thinking at this point.” She said the decision would be the best decision for the United States, and that Mr Trump would speak to a number of leaders before announcing the decision. Palestinian president Mahmoud Abbas, Jordan’s King Abdullah and Egyptian president Abdel Fattah al-Sisi were among those Mr Trump contacted on Tuesday.

Ahead of the expected announcement, several international leaders spoke out against the proposed move, urging the US to reconsider a decision that many believe would undermine stability in the region and scupper the stalled peace process.

Mr Abbas’s spokesman said the Palestinian leader, who met Mr Trump in Washington DC in May, warned the US president of the “dangerous consequences such a decision would have to the peace process and to the peace, security and stability of the region and of the world.” Turkey also warned Washington that the issue was a “red line” for Muslim countries.

French president Emmanuel Macron led European objections to the reported move. During a phone call with Mr Trump he said that Jerusalem’s status had to be dealt with in the framework of peace negotiations “with the aim in particular to establish two countries, Israel and Palestine, living in peace and security side by side with Jerusalem as capital,” his spokesman said.

Speaking alongside US secretary of state Rex Tillerson during a visit to Brussels, the EU’s foreign policy chief Federica Mogherini said that “any action that would undermine” peace efforts to create two separate states for the Israelis and the Palestinians “must absolutely be avoided.”

Mr Trump sparked international concern in the early weeks of his presidency when he appeared to question the necessity of a two-state solution to the Israeli-Palestinian issue, a bedrock of international policy on the Middle East for decades.

Mr Trump’s son-in-law Jared Kushner has been playing a central role in the Trump administration’s Middle East policy. On Sunday, Mr Kushner said that no decision had yet been made on whether to move the embassy.