Ramaphosa edges ahead in bid to lead South Africa’s ANC 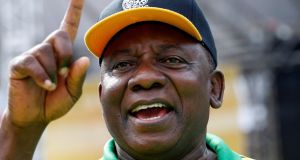 South Africa’s deputy president Cyril Ramaphosa: The 930 voting delegates from branches that did not finalise their nominations on time could change the shape of the ANC leadership race. Photograph: Mike Hutchings/Reuters

South Africa’s deputy president Cyril Ramaphosa appears to have an early lead in the race to become the next president of the ruling African National Congress, having secured the majority of the party’s submitted branch nominations.

Mr Ramaphosa, who is also ANC deputy president, was nominated for president by 1,862 ANC branches, with 1,309 backing his main rival, Nkosazana Dlamini-Zuma, according to tallies released by the ruling party’s provincial structures ahead of the elective conference in December.

Of the nine ANC provincial structures, Mr Ramaphosa received the majority of the branch nominations in Gauteng, Limpopo, Eastern Cape, Northern Cape and the Western Cape. Ms Dlamini-Zuma, who is a senior party member and former government minister, was in the ascendancy in North West, Free State, KwaZulu-Natal and Mpumalanga.

The ANC branches are expected to account for the vast majority of the estimated 5,000 voting delegates who will attend the five-yearly elective conference.

The winner of the ruling party’s presidential election will take over from outgoing ANC leader Jacob Zuma, although his term as South Africa’s president only officially ends in 2019.

The elective conference is due to start on December 16th in Soweto, Gauteng, and it will run for four days. During this time delegates will elect the ANC’s top six leaders as well as the members of its national executive committee for the next five years.

However, the branch tallies that were submitted by Monday’s deadline only give Mr Ramaphosa the edge in what has been a highly competitive and confrontational election contest to date.

The vote could still swing in favour of Ms Dlamini-Zuma

There are still up to 930 voting delegates who can come from branches that did not finalise their nominations with their provincial structures on time. While no decision has been taken yet on whether they will be allowed to attend the conference, most are expected to.

In addition, a further 223 branches in Mpumalanga spoilt their nominations for the ANC’s top jobs in an apparent bid to undermine the factional nature of the contest so far. They will also send voting delegates to the conference.

With the remaining delegates drawn from the party’s national and provincial leadership structures, as well as the youth, women and military veterans’ leagues, the vote could still swing in favour of Ms Dlamini-Zuma.

Ms Dlamini-Zuma is Mr Zuma’s ex-wife and preferred candidate. If she wins the ANC presidency, Mr Zuma is expected to see out his term as South Africa’s leader.

However, the corruption allegations that continue to swirl around him could negatively affect her chances of becoming South Africa’s president in 2019, when general elections are due.

If Mr Ramaphosa is elected then the ANC is expected to recall Mr Zuma from office early next year. This would to give Mr Ramaphosa and the ANC the opportunity to run a general election campaign without the compromised Mr Zuma undermining their efforts to attract voter support.