Trump under pressure as Russians indicted for hacking emails 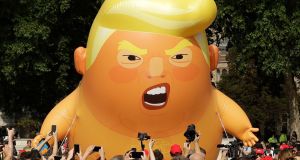 The indictments – announced by deputy attorney general Rod Rosenstein during a midday press conference in Washington – were revealed just as the US president was meeting Queen Elizabeth at Windsor, the centre-piece of his three-day visit to Britain.

The charges led to a chorus of calls from Democrats for Mr Trump to cancel the meeting with the Russian president scheduled for Helsinki on Monday – the first bilateral summit between the two leaders.

The charges were filed against 12 members of the Russian military intelligence agency, the GRU, who were acting in their official capacity, the department of justice said. While the Mueller investigation into Russian election interference has filed previous indictments, this is the first time the Russian government has been directly accused of meddling.

The individuals deliberately hacked email accounts of the Democratic National Committee and the Hillary Clinton campaign, according to the indictment, then filtered that information through fictitious online personas.

Speaking during a press conference with prime minister Theresa May at Chequers before the charges were announced, Mr Trump said he planned to raise Russian meddling with Mr Putin during his meeting. The US president had already been briefed on Friday’s indictments earlier in the week, deputy attorney general Rod Rosenstein said.

Mr Trump left England for Scotland on Friday night after a tumultuous 24 hours, during which he criticised Theresa May’s Brexit strategy and praised her arch-critic Boris Johnson in an explosive interview with the Sun newspaper.

The US president backtracked on his comments during his press conference with Ms May on Friday, describing the prime minister as a tough negotiator and acknowledging that leaving the European Union was complex. “I don’t know what you’re going to do, but whatever you’re going to do, it’s okay with us,” he said.

The president said he had apologised to the prime minister on Friday morning because, he said, the newspaper had not reported his praise for her during the interview. In fact, the Sun did report his complimentary remarks but the president said later that he had not seen them.

Later Mr Trump and his wife, Melania, met Queen Elizabeth at Windsor Castle, where they were greeted by the band of the Coldstream Guards and inspected a guard of honour from the regiment. The appointment for tea with the queen was scheduled to last just 25 minutes, but the event ran for almost an hour.

Tens of thousands of protesters took part in an anti-Trump demonstration in London, which organisers estimated to number 250,000. There were also protests in other cities. Labour leader Jeremy Corbyn addressed the protesters in Trafalgar Square, telling them that the demonstration’s message was one of solidarity.

At Chequers, the prime minister’s country house, Ms May said that her Brexit proposal on Britain’s future relationship with the EU would not prevent Britain from agreeing new trade deals and she looked forward to negotiating a trade agreement with the US.

“The Chequers agreement reached last week [on the future EU-UK relationhip] provides the platform for Donald and me to agree an ambitious deal that works for both countries right across our economies,” she said.

The US president said that, having spent time with the prime minister, he now believed a trade deal would, in fact, be possible – contrary to his Sun comments – if she secured the right agreement from the EU.

“I read reports where that won’t be possible, but I believe after speaking with the prime minister’s people and representatives and trade experts it will absolutely be possible.”