Brett Kavanaugh has been nominated by US president Donald Trump to the US supreme court, in a move that is likely to secure the conservative majority on the court for decades to come. Video: The White House 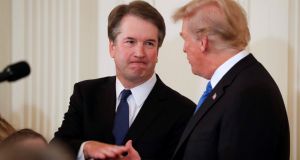 Brett Kavanaugh has been nominated by US president Donald Trump to replace Anthony Kennedy on the US supreme court, in a move that is likely to secure the conservative majority on the court for decades to come.

Mr Kavanaugh (53), who has served as an appeals court judge in Washington DC since 2006, must receive Senate confirmation before his approval. With Republicans holding a majority in the 100-member house, he is expected to be confirmed.

Announcing the nomination in a ceremony at the East Room of the White House which was televised live across the nation on Monday evening, Mr Trump said that there was “no one in America more qualified for this position, and no one more deserving”.

Mr Kavanaugh’s nomination was a closely-guarded secret right up to the announcement. The US president had whittled the possible nominees down to four over the weekend.

As well as his experience as a judge, Mr Kavanaugh has previously worked in the political sphere and is viewed as a Washington insider. He worked with special counsel Kenneth Starr during the Bill Clinton investigation, focusing in particular on the then president’s relationship with Monica Lewinsky.

Having represented George W Bush in the Bush versus Gore standoff in Florida during the presidential runoff in 2000, he then worked for the George W Bush White House. He also served in the solicitor general’s office during the George HW Bush administration.

Since his nomination to the DC circuit court he has authored more than 300 opinions, and currently teaches at Harvard, Yale and Georgetown.

Accepting the nomination in the White House alongside his wife and two young daughters, a smiling Mr Kavanaugh thanked the president and pledged to meet with members of the Senate in the coming days.

He said his judicial philosophy was simple – that “a judge must be independent – interpret the law, not make the law.”

Mr Kavanaugh, a practising Catholic, described his upbringing as an only child. He thanked his parents, who were present at the White House, and described the influence of his mother who taught in public schools in African-American districts of Washington before training as a judge.

Though Mr Kavanaugh emerged as a front-runner in recent days, he was not on an original list of 20 possible supreme court nominees drawn up by Mr Trump during the presidential campaign.

It is believed that the DC native’s links with the Bush administration was a concern for the US president initially.

But comments by Mr Kavanaugh in 2009 have come into focus in recent days – and are likely to surface in his confirmation hearing.

Writing in the Minnesota Law Review, he said he believed that sitting presidents should not be subject to civil or criminal lawsuits while president because they constituted a distraction from the business of governing – a potential issue for Mr Kavanaugh given the ongoing Mueller investigation.

While most Republicans are likely to back Mr Kavanaugh, there are questions about the support of more left-leaning Republican such as Susan Collins of Maine and Lisa Murkowski of Alaska.

However, some Democratic senators in traditional Republican states may choose to endorse the nominee, reducing pressure on Republicans to secure a vote on party lines. With a majority of just one, and senator John McCain still away from Washington due to illness, the arithmetic could be challenging for Senate majority leader Mitch McConnell.

As he made the announcement, Mr Trump said that the nomination of a supreme court justice was “one of the most profound responsibilities of the president of the United States”.

“Other than matters of war and peace, this is the most important decision,” he said.