US asks court for extension over migrant family reunifications 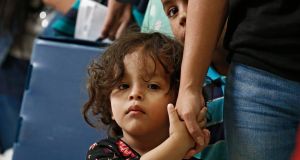 A file image of migrant families are processed at the Central Bus Station before being taken to Catholic Charities before being removed in McAllen, Texas. Photograph: EPA 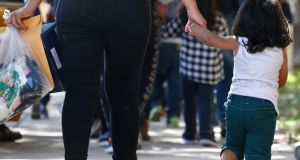 A little girl and a woman along with other migrant families cross the street after being processed at the Central Bus Station before being taken to Catholic Charities before being removed in McAllen, Texas. Photograph: EPA

The Trump administration has asked a federal judge for more time to reunite migrant families separated by authorities at the southwestern border, highlighting the challenge of confirming familial relationships between parents and children who now may be thousands of miles apart.

Parents of 19 of the 101 detained children under 5 have been deported, a lawyer for the Justice Department reported Friday, though the government has said it was taking precautions not to deport parents whose children are still in custody.

In the case of 19 others, the parents have been released and their whereabouts is unknown, government lawyers said.

Judge Dana Sabraw of US District Court in San Diego had set a deadline of Tuesday for reuniting the youngest children with their parents, and in a conference Friday, the judge did not issue a blanket extension.

Instead, he gave the government until Saturday evening to come up with a list naming all 101 of the youngest children, along with an explanation of why it would be impossible to promptly restore them to a parent.

Only after the US government provided such a list said, “can we have an intelligent conversation Monday morning about which child can be reunited by July 10th, which will not and then the court can determine whether it makes sense to relax the deadline. But I need more information.”

The Trump administration has been scrambling to streamline the process of reuniting migrant children and their families, as the human toll of president Donald Trump’s immigration policy becomes apparent and the political pressure grows to quickly address it.

But administration officials who spoke on the condition of anonymity portrayed the operation as a bureaucratic nightmare involving different computer systems, databases and filing systems, and staffs that have been at odds with one another about how to proceed and what information to share with the public.

One administration official involved in the effort said Friday that the process of reuniting migrant children with their parents had been sped up considerably with the use of DNA screening instead of consular records.

But the process has been complicated because the judge’s ruling applied not only to children taken from their parents under the “zero-tolerance” border policy, but those separated for other reasons, several officials said.