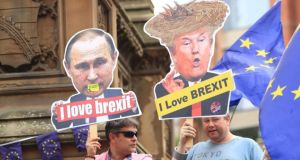 Despite an upbeat welcome in Brussels for the UK’s White Paper, the 27 EU member states have been warned to step up their contingency planning for a Brexit no-deal.

The prospect of Britain leaving the EU at the end of March next year without a deal or a transition hinges largely on whether the EU can finalise the legal text of a “divorce treaty”, the withdrawal agreement. Its fate still hangs on what a draft paper from the commission warns is the “still unresolved” backstop issue.

“No progress has been made in agreeing a ‘backstop’ to avoid, independently of the outcome of the negotiations of the future partnership, a hard border on the island of Ireland,” a 15-page draft, leaked to RTÉ, says.

The paper was apparently written by a “preparedness”team working for European Commission secretary general Martyn Selmayr, which is preparing for a no-deal scenario.

Commission officials would not confirm its authenticity, although it rings true, and it is understood that such a paper is being prepared for next week’s meeting of Brexit ministers on Friday. That meeting of the General Affairs Council (Article 50) is due also to consider a first response to the British White Paper.

But although the paper warns of the potentially chaotic situation on April 1st next year in ports and airports, and in sectors as varied as pharmaceuticals and financial services, it does not answer crucial questions for Ireland about the Border.

In the event of a no-deal should Ireland plan for April 1st on the basis that the Border remains as frictionless as it is today, and that Irish citizens can continue to avail of the Common Travel Area? In other words what is the status of UK commitments? Are they unconditional on a deal? And what obligations would Ireland face to the other 26 in its management of a no-deal Border?

The Selmayr paper does not clarify these issues.

The paper warns all member states to make preparations across a range of areas, including customs, aviation and controls on food, animal and plant products, and financial services.

“Although the withdrawal of the United Kingdom may appear to be playing out at a very high and rather abstract level between the United Kingdom and the EU,” the paper says, “its consequences will be very real for citizens, professionals and business operators.”

Under the no-deal scenario, the paper advises member states, “the EU must apply its regulation at all borders with the United Kingdom as a third country, including checks and controls for customs, sanitary and phytosanitary standards and norms verification, movement of persons (potentially including visa requirements) purposes.”

Responsibility for planning for such an eventuality remains primarily with member states, it says.

5 Minister to consult Cabinet over call for Rusbridger’s resignation