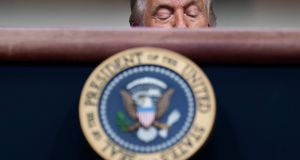 US president Donald Trump: his wife Melania and he requested an absentee ballot in Florida to enable them to vote remotely in November. Photograph: Brendan Smialowski

Former US president Barack Obama accused president Donald Trump of trying to “kneecap” the US postal service, as he urged citizens and lawmakers to “protect the integrity” of November’s election.

The former president’s remarks come amid a deepening controversy over the expansion of postal voting ahead of the election.

Mr Trump has renewed his attack on postal voting in recent days, arguing that it will lead to a rigged election.

He also threatened to withhold $25 billion in emergency funding for the United States Post Office, suggesting in an interview this week that this was linked to his desire to discourage mail-in voting.

As filings showed that the president and his wife Melania requested an absentee ballot this week in Florida to enable them to vote remotely in November, Mr Trump alleged that the US postal office could not cope with the “vast amount of ballots that are being sent, at random, all over the place”.

Mr Trump – who was travelled to New York on Friday to visit his brother Robert, who has been admitted to hospital – was speaking as New Jersey became the latest state to announce it will send mail-in ballots to all registered voters, giving people the choice to vote by mail or in-person.

While most states offer some form of absentee voting, only eight states plus Washington DC currently offer mail-in ballots automatically to voters.

Mr Trump has said that he supports absentee ballots, where people apply to vote by mail if they are unable to visit a polling station on election day, rather than a system whereby mail-in ballots are automatically sent to all registered voters.

Republicans have brought a number of lawsuits in states like Iowa and Pennsylvania challenging their expansion of mail-in voting.

The US Postal Service’s internal watchdog is investigating cost cutting that has slowed delivery and alarmed lawmakers ahead of a presidential election when up to half of US voters could cast ballots by mail, a congressional aide said on Friday. The Postal Service’s inspector general also will examine possible conflicts of interest involving new Postmaster General Louis DeJoy, who has donated $2.7 million to Mr Trump and his fellow Republicans, according to Saloni Sharma, a spokeswoman for Democratic Senator Elizabeth Warren, who requested the investigation.

Mr DeJoy owns millions of dollars in stock in Postal Service rivals and customers, according to a financial disclosure form filed by his wife. The Inspector General’s Office is “conducting a body of work to address concerns raised,” spokeswoman Agapi Doulaveris said.

The investigation comes as the Postal Service is warning states there is “significant risk” voters will not have enough time to complete and return their ballots. The Postal Service late on Friday released letters it had sent to 46 states and the District of Columbia, after the Washington Post reported earlier on the extent of the warnings.

Meanwhile, Mr Trump prompted widespread criticism from Democrats and some Republicans for giving credence to so-called “birther” theories that Joe Biden’s new running mate, Kamala Harris, cannot be vice-president because of her heritage.

The president – who was a leading proponent of conspiracy theories about Barack Obama’s place of birth – was asked about the theory at a press briefing in the White House.

Mr Trump’s failure to denounce the comments come on the back of a widely circulated opinion piece by conservative law academic John Eastman in Newsweek magazine. The article questions whether Ms Harris is eligible to become vice-president or president under the US constitution, claiming that neither her father nor mother was a naturalised US citizen at the time of her birth in 1964.

Ms Harris’s mother was a cancer researcher who emigrated from India while her father emigrated to the United States from Jamaica.

The Biden campaign team described the comments as “unsurprising” but “abhorrent”.

At a campaign event in Wilmington, Delaware where Ms Harris and Mr Biden signed the required documents to allow them to accept their party’s nomination next week at the Democratic National Convention, Ms Harris declined to answer questions from a reporter about Mr Trump’s recent attacks on her.  “I’m signing this because I’m in this race to win and with that guy right there,” she said.

“There is no issue as to whether or not she is an American citizen,” he tweeted. “She was born in the United States in 1964 to parents who were legally present. Under the constitution and supreme court precedent, she is unequivocally an American citizen.” – with Reuters