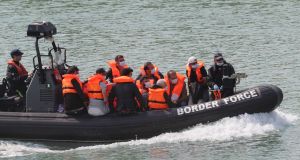 The UK and France are working “at pace” on a new plan to put an end to people attempting to cross the English Channel in small boats, a Home Office minister has said, as tensions rise over the British government’s approach to an unfolding crisis.

Following talks with officials in Paris, Chris Philp, minister for immigration compliance, conceded the French were doing a “great deal of work” and had intercepted more than 1,000 people attempting to reach England this year after days of loaded statements from the two nations.

But Mr Philp’s remarks were light on detail on what the “new operational plan” would involve, although he said if it was successful in making the Channel route unviable then “migrants will have no reason at all to come to France in the first place”.

His statement is unlikely to assuage those who have accused the British government in recent days of having an “increasingly chaotic” approach.

On Monday, the RAF flew a transport plane around the Channel at about 1,500ft. The purpose and outcome of the flight remains unclear but followed a request for military assistance from home secretary Priti Patel to the ministry of defence.

Humanitarian groups and refugee and migration experts have urged the government to consider bolstering or creating safe and legal routes to the UK for asylum seekers, which they argue would reduce the number of people risking their lives at sea to reach the UK.

Prime minister Boris Johnson was accused on Monday of scapegoating people who are risking their lives by crossing the Channel to seek asylum in the UK and using “inaccurate and inflammatory” language to describe their plight.

And on Tuesday, Natalie Elphicke, the Conservative MP for Dover, distanced herself from rhetoric used by fellow Tories in a letter to the home secretary, in which they referred to “invading migrants”. A group of 23 Conservative MPs and two peers on Monday wrote to Ms Patel to demand “stronger enforcement” efforts to combat a “surge in illegal immigration” as the number of arrivals in small boats surpassed the 4,100 mark so far in 2020.

Ms Elphicke, whose Dover constituency has witnessed a significant proportion of the arrivals, has been pushing for tougher action and improved support from the French government, describing people “who break into our country”.

But appearing on BBC Radio 4’s Today programme on Tuesday, she refused to condone the language used by her colleagues.

Asked if she would use the term “invading migrants”, she said: “That’s not my letter. I didn’t sign it and I do not use the language you refer to. These are illegal entrants – we could and should take action. We are looking to work with France and it’s essential here in Dover we put a stop to these small boat crossings.” – Guardian

1 How one couple’s weekend away resulted in 30 Covid-19 cases
2 Taoiseach tells TD to ‘cop on’ over criticism of contact tracers asking about pubs
3 Miriam Lord: Government’s latest comedy of errors offers little to laugh about
4 Trump urges Proud Boys to ‘stand down’ after debate criticism
5 Coronavirus out of control in Britain, chief scientific adviser admits
Real news has value SUBSCRIBE