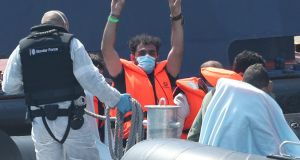 More than 4,000 people have reached UK shores this year by risking the dangerous journey across the English Channel in small boats after another significant number of arrivals this weekend.

Families with young children were among hundreds of people who came ashore near Dover this week, including 151 on Saturday, the home office confirmed.

The latest arrivals put the total number of people arriving in small boats in 2020 at more than 4,100, according to analysis by PA Media. The home office does not provide a total figure for the year.

As the number seeking asylum in the UK rises, the home office has asked the navy for help, and a former royal marine has been appointed “clandestine channel threat commander” to make the route across the Dover strait “unviable”.

Steve Valdez-Symonds, Amnesty International UK’s refugee and migrant rights programme director, said deploying the navy to prevent people exercising their right to seek asylum in the UK would be “unlawful, reckless and dangerous”.

“What is needed is co-operation with France to share responsibility for providing a place of safety, including the UK government reuniting families and enabling more people to travel safely to make asylum claims in this country,” he said.

“But while ministers beat their chests, the real and immediate needs of women, men and children fleeing war and persecution are being ignored. Tragically the only people benefiting from the UK government’s increasing determination to shirk responsibility are smugglers and hate mongers.

“It is wholly legitimate for people to seek asylum in this country – even though relatively few people do – and sadly for some these dangerous journeys are the only means available.”

So far in August more than 650 people have successfully reached British shores in small boats, with the majority arriving this week.

On Thursday, the Guardian published testimony from asylum seekers telling of increasingly brutal tactics used by people-smugglers overseeing small boats as calm seas and the Covid-19 pandemic create a boom in the trade.

Home secretary Priti Patel previously said the crossings would become an “infrequent phenomenon”, and has sought to blame her French counterparts for the increase. Ms Patel and other ministers have expressed frustration at French efforts to prevent people crossing the Channel.

The home office said Mr O’Mahoney would urgently explore tougher action in France, including stronger enforcement measures, interceptions at sea and the direct return of boats.

Bridget Chapman, the spokeswoman for the Kent Refugee Action Network, said: “The government’s handling of this issue is becoming increasingly chaotic, with elements of sabre-rattling. Nothing they have done so far has worked. They have spent millions of pounds of taxpayers’ money fortifying the port at Calais, have increased patrols in the channel, and are now escalating a failing strategy by calling in the military to deal with a humanitarian situation.”

Ms Chapman called for Ms Patel and her French counterparts to offer people a safe and legal route to the UK. “That would close this route overnight, would save lives, and we would know exactly who was arriving and when.”

The home office denied reports in the Mail on Sunday that prisons would be used to house people arriving in the UK via the channel. “We also do not use prisons to house migrants and there are no plans to do so,” the department said.

“Those who make the perilous journey are medically checked, interviewed by immigration officers and then held in immigration detention.”

It has also denied underestimating the number of arrivals. – Guardian