After days of speculation China has confirmed that Kim Jong-un has visited the country, his first known trip abroad since assuming power in 2011. Video: CCTV 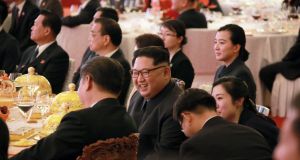 Kim Jong-un in Beijing: the North Korean leader with Xi Jinping, the Chinese president, at a banquet at the Great Hall of the People. Photograph: KCNA via AP

Donald Trump has said he looks forward to meeting Kim Jong-un, following confirmation that the North Korean leader met his Chinese counterpart in Beijing this week.

In an early-morning tweet the US president said: “For years and through many administrations, everyone said that peace and the denuclearization of the Korean Peninsula was not even a small possibility. Now there is a good chance that Kim Jong Un will do what is right for his people and for humanity.”

For years and through many administrations, everyone said that peace and the denuclearization of the Korean Peninsula was not even a small possibility. Now there is a good chance that Kim Jong Un will do what is right for his people and for humanity. Look forward to our meeting!

Mr Trump astonished other countries, and even his own advisers, earlier this month by accepting an invitation from the North Korean leader to meet, delivered through a South Korean delegation visiting the White House.

Asked if a May meeting was still on the cards, Ms Sanders said the Trump administration “would like to see this”. But, she added, “This is something of global importance, and we want to make sure it’s done as soon as we can, but also done properly.”

She described the meeting between Mr Kim and Xi Jinping as a sign that the American policy of “maximum pressure” was working, noting that it was Mr Kim’s visit to China was his first trip abroad as leader. She said the White House was “cautiously optimistic” about developments on the Korean Peninsula, adding: “We feel that things are moving in the right direction.”

As Mr Trump prepared for a visit on Thursday to Ohio, where he is expected to give a speech on infrastructure, a federal court ruled that two cases taken against him by the attorneys general of Maryland and the District of Columbia, for violating the constitutional ban on presidents’ taking emoluments from foreign governments, can proceed. They argue that Mr Trump is unfairly profiting from visits by foreign customers, including businesspeople, to the Trump International Hotel in Washington, and is drawing business from other nearby hotels and convention centres. In his ruling on Wednesday, Judge Peter Messitte, of the district of Maryland, rejected justice-department arguments to dismiss the suits.

Meanwhile, the White House hit back at reports that John Dowd, Mr Trump’s recently departed lead counsel for Robert Mueller’s investigation of Russian interference in the 2016 US presidential election, broached the idea of the president’s pardoning his former national-security adviser Mike Flynn and former campaign manager Paul Manafort. The New York Times reported that Mr Dowd raised the possibility of a pardon as the special counsel’s investigation was focusing on their activities last summer. The White House lawyer Ty Cobb, who was taken on to be the in-house counsel for Russia-related matters, said that no pardons had been discussed or considered.