March for Our Lives: Activists hope major rally can impact upon mid-term elections 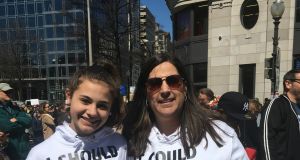 Michelle Rossi and her fourteen-year-old daughter Olivia attended the march. Olivia, an eighth-grader from Maryland, has had her own experience with gun crime. Photograph: Suzanne Lynch/The Irish Times

They came in their thousands. Shortly before noon on Saturday, students, parents and ordinary citizens from across the United States descended on Washington DC for one of the biggest demonstrations since the Vietnam War.

Once again it was the actions of their government that brought them onto the streets – this time not a war in a faraway country in southeast Asia, but a regime in their own country that allows a 19-year-old American to legally buy an assault weapon and inflict murder on his own people.

In the warm spring sunshine, thousands of people marched along Pennsylvania Avenue to hear students of the Marjory Stoneman Douglas High School in Florida tell their stories and try to change America’s gun laws once and for all.

Among those who had made the trip to Washington was Sally Anderson from Pennsylvania. Her father and stepmother were shot dead by a handyman who worked for them in 2001. She discovered the bodies.

“Although the gunman was mentally ill, he was allowed to amass a pile of guns,” she said. “He had already tried to shoot at two sheriffs when they tried to arrest him for failure to pay his taxes. If we’d had universal background checks, he would never have been allowed to have a gun. He died before he went to trial.”

She hopes this weekend can mark a turning-point for US gun laws. “I came here because I have been so moved by the students in Florida. They’re so articulate, they’re so passionate. If we’re ever going to get something done then now is the time, and I just wanted to be here to support it.”

Michelle Rossi and her 14-year-old daughter Olivia also attended the march. Olivia, an eighth-grader from Maryland, has had her own experience with gun crime.

Just last week a 17-year-old student opened fire at a neighbouring school in Great Mills, Maryland, injuring two students, one of whom later died. The suspect was shot dead by the school police officer.

She says that while she feels safe, she wants to feel safer. Her mother agrees, but is wholly against the idea of arming teachers. “I am 150 per cent against it. They’re not trained, it’s not their job. It shouldn’t be their responsibility. They have a million other things they should be responsible for,” she said. “I’m here to support their right not to have to carry a gun.”

But while the demonstration was filled with Americans who had been directly or indirectly affected by gun crime, it was the powerful testimony of those who took to the stage at the March for Our Lives rally in Washington that captivated the nation.

One by one, survivors of the Parkland killings and young people who had been affected by gun crime took to the stage. Some sang, some spoke – one Parkland survivor who had been shot in both legs had to stop and be sick before composing herself; another, Emma Gonzalez, stood silent on the stage for six minutes and 20 seconds – the time it took the gunman to kill her classmates.

To those politicians supported by the NRA that allow the continued slaughter of our children and our future, I say get your resumés ready

While the catalyst for the march may have been the Parkland shooting, the scope of the demonstration was much wider. One Chicago teenager recalled how she had been caught up in a violent gun crime in a supermarket in her neighbourhood and had been warned to say nothing as a gun was pointed at her.

The nine-year-old granddaughter of civil rights activist Martin Luther King jnr, himself a victim of gun crime, took to the stage. “My grandfather had a dream that his four little children would not be judged by the colour of their skin, but by their character. I have a dream that enough is enough, and that this should be a gun-free world, period,” said Yolanda Renee King.

Running through Saturday’s event was a strong political current. “To those politicians supported by the NRA [National Rifle Association] that allow the continued slaughter of our children and our future, I say get your resumés ready,” Parkland student David Hogg roared to cheers.

Chants of “Vote them Out, Vote Them Out!” rippled through the crowd periodically. Women armed with notepads walked among the crowd, registering people to vote.

As the demonstrators began to disperse across Washington and return to their lives and communities, many were hoping that March 24th could be the start of something new – a moment of political activism that could filter through to this year’s mid-term elections and mark a turning point in US politics.