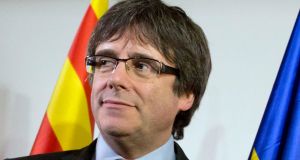 Former Catalan president Carles Puigdemont: the final decision on whether to extradite him from Germany to Spain will be taken by the higher regional court in Kiel. Photograph: Virginia Mayo/AP 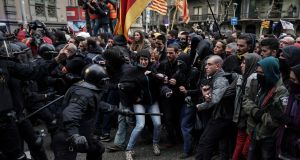 Former Catalan president Carles Puigdemont will spend Easter in a northern German prison – and possibly much longer – as courts there decide how to act on a European arrest warrant issued by Spain.

The detention of Mr Puigdemont came on Sunday morning when the 55-year-old politician, on a 2,000km road trip from Finland to his self-imposed exile of Belgium, was arrested by German Autobahn police just south of the Danish border on the A7 motorway.

After a night in custody in Neumünster, an hour north of Hamburg, Mr Puigdemont appeared before a district court there on Monday to confirm his identity on foot of the Spanish warrant, renewed last Friday, on charges of rebellion, sedition and embezzlement.

The court ordered that Puigdemont be held in custody for the length of extradition proceedings, prosecutors said.

His court appearance begins a complicated legal procedure that can take up to 60 days.“The final decision could take some time, at least a few days if not longer,” said a spokesman for the state prosecutor in Schleswig.

First it is up to state prosecutors in the northern state of Schleswig-Holstein to examine the three charges against the politician. They do not fall under the obligatory grounds for a European arrest warrant (EWA) handover, meaning they must decide if there are legal equivalents in Germany.

Legal experts say this is the case in two of the three charges but not in the case of sedition, which was removed from the German statute books 50 years ago. On the two relevant charges, embezzlement may be valid grounds while treason charges under German law require perpetrator links to violence or incitement to violence. The Catalan leader has always denied being associated with violence, which may rule out that charge.

The prosecutor will make a recommendation to the court, after which lawyers for the politician make their case. Eventually the court has to make its decision by considering whether the mutual trust on which the EWA system is based still exists in the Spanish justice system.

The final ruling can be appealed and could end before Germany’s constitutional court in Karlsruhe.

In Berlin, the federal government said it would not get involved in the court case – for now at least. “The first steps are purely judicial and thus it is essential to wait for that,” said justice minister Katarina Barley.

A spokesman for the chancellor Angela Merkel said she had full trust in the Madrid administration and the rule of law in Spain.

“The federal government remains of the position that this is a situation that must be solved inside the Spanish legal and constitutional order,” said Steffen Seibert, government spokesman. “The Spanish government has always insisted that Mr Puigdemont and his ministers are not sought because of their independence ideas but on charges of concrete crimes.”

Officials in Berlin on Monday declined to confirm the arrest took place after contact between the Spanish and German intelligence services. An interior ministry spokesman defended the arrest in Germany – after other EU countries declined to act.

“If an enforceable European arrest warrant is on hand it is not the task of police to carry out political considerations ... but arrest the person,” added the spokesman.

Mr Puigdemont’s detention has divided public opinion in Germany, where there is some support for Catalonia’s separatist campaign.

The Green Party called for EU mediation while the opposition Left Party called his detention a “disgrace” and demanded his immediate release.

“It would be wise for him to end the matter peacefully,” he said.