No such thing as ‘good Brexit for Britain’, says Owen Smith 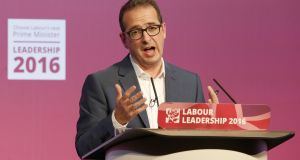 Owen Smith, the former shadow Northern Ireland secretary, who was sacked for calling for a second Brexit referendum. Photograph: PA

The British Labour party’s former Shadow Northern Ireland spokesperson Owen Smith, said there is no such thing as “a good Brexit for Britain”.

Mr Smith also said he believe this view was the reason he was sacked from the from the shadow frontbench by Jeremy Corbyn on Friday, and defended his choice to break with Labour party policy by calling for a referendum on the final Brexit deal.

Mr Smith said his decision to openly support a second Brexit vote was based on principle, and said the Labour party was in danger of “sleepwalking” towards adopting a Brexit position that would damage the British economy.

Speaking on RTÉ’s Morning Ireland on Monday Mr Smith said: “We are in the extraordinary set of circumstances where we have a government knowingly pursuing a policy that their own analysis shows is going to be damaging to our economy.

“Not a little bit damaging, the best case scenario is essentially a two per cent reduction in GDP - that’s as big a fall in the size of our economy as we saw during the Bankers’ Crash in 2008 which led to a generation of austerity, so essentially the government is signing us up, according to their own analysis, to another generation of austerity and that to me seems to be frankly, crackers.

“I don’t think Labour should be rowing in behind a soft Brexit. I think we should be trying to stop Brexit.”

“I don’t think there is such a thing as a ‘good Brexit for Britain’ which is why I’ve said what I’ve said, and why I’ve been sacked from the front bench.”

“I think Brexit is going to be bad for Britain.

“Our party’s policy is to effectively accept Brexit and to seek to mitigate the worst effects of Brexit, so we are saying we should stay within a Customs Union not the Customs Union and we’re saying that we want a strong relationship with the Single Market and we don’t want to see a hard border in Ireland.

“My view, which is why I’ve been sacked, is that is insufficient and that we need to be much more robust in spelling out the scale of the risks we face as a country and much clearer about what the solutions are.

“For example I don’t see that there are technical solutions that anybody has seriously put forward.

On Sunday Britian’s Bexit secretary David Davis promised there will be no cameras or any other physical infrastructure on the Border after Brexit.

Mr Davis told the BBC’s Andrew Marr he was confident Britain and the European Union would reach an agreement on the Border’s future and there would be “no cameras, no booths, no wire, no nothing”.

“That’s right. Basically, we will do as we do now, when we deal with smuggling across the Northern Ireland to Republic of Ireland Border. It’s dealt with by intelligence-led policing, intelligence-led customs investigations. It happens now and that’s what will happen in the future,” he said.

Officials from Britain, Ireland and the EU will meet on Monday to discuss options for the Border after Brexit following last week’s agreement in Brussels that a solution must be found by October.

British ministers have recently offered loose definitions of a hard border, with Brexit minister Robin Walker describing it as one where physical infrastructure “gets in the way” of everyday lives.

Mr Davis offered a harder definition, effectively ruling out any physical change at the Border after Britain leaves the EU.

In response Mr Smith said it was interesting that Mr Davis, so many months after the referendum, “still can’t tell us definitely what these technical fixes are.”

“You’d have thought if it was so simple that they’d be able to tell us by now.”

Mr Smith added he did not think Mr Corbyn needed to sack him. “I think Diane Abbot sits on the Shadow Cabinet, she said something similar some weeks ago in a letter to her constituents so there is a bit of double standards.”

He said as the facts become clearer about Brexit and about how many problems there are going to be for “our economy, for our security, for Northern Ireland as a result of Brexit” then it is right to continue to ask if it is the right course for the country.

“If the country determines that then we should put it back to the people.”