Thousands to take part in ‘March for Our Lives’ gun protests 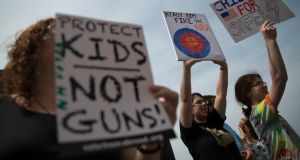 Israelis and Americans participate the “March for Our Lives” rally supporting gun control in the US, outside the US embassy in Tel Aviv, Israel. Photograph: Oded Balilty/AP

Hundreds of thousands of protesters are expected to descend on Washington on Saturday for an anti-gun protest, as calls for tighter control intensify across the US following a spate of mass shootings.

The March for Our Lives event has been organised by survivors of the Marjory Stoneman Douglas High School massacre in Parkland, Florida, last month, which left 17 people dead when a former student entered the school and opened fire.

Similar demonstrations are being held across the country and further afield, with up to 800 events scheduled worldwide, according to the event organisers.

In Washington, demonstrators are due to proceed down Pennsylvania Avenue, one of the city’s main thoroughfares.

There is expected to be a strong celebrity presence, with artists Ariana Grande, Jennifer Hudson and Vic Mensa due to perform at the DC event. Other celebrities including George and Amal Clooney, Oprah Winfrey and Steven Spielberg have donated funds to the organisation which was established in the wake of the mass shooting and may be in attendance.

In a statement issued ahead of the demonstration, the organisers called on Congress to introduce stricter gun legislation: “No special interest group, no political agenda is more critical than timely passage of legislation to effectively address the gun violence issues that are rampant in our country,” they said in a statement.

Nikolas Cruz, a 19-year-old former student at Marjory Stoneman Douglas school, has been charged with 17 counts of premeditated murder. Prosecutors in Florida are seeking the death penalty for the crime, though lawyers representing Cruz have said he will plead guilty if the death penalty is not pursued.

The Parkland school shooting was the third mass shooting to take place in the US in five months, following attacks in Las Vegas and Sutherland Springs, Texas. But as the most deadly school shooting since the 2012 Sandy Hook massacre, the Florida sparked renewed debate about gun control and availability.

Cruz legally purchased the AK-15 style rifle that was used to carry out the attack in Florida. Earlier this month, the Florida state legislature passed new laws raising the minimum age for purchasing an assault-style weapon to 21.

At a federal level, modest gun control measures were included in the $1.3 trillion spending package passed by Congress this week. The measures include $50 million in grants for schools to help prevent gun violence, and improvements to the background check system.