Speaking on US television show 60 Minutes, adult-film actor Stormy Daniels alleges she was threatened to keep quiet over her reported relationship with Donald Trump. Video: 60 Minutes/CBS 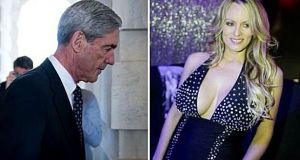 Michael Cohen’s lawyer has demanded that Stormy Daniels “immediately retract and apologize to Mr Cohen through the national media” after her 60 Minutes TV interview.

The White House has attacked the credibility of Stormy Daniels, the adult film star who spoke out on US TV on Sunday night about her alleged affair with the US president and threats she said she had received.

Speaking from the podium of the White House press briefing room, administration spokesman Raj Shah said: “With respect to that interview, I will say the president strongly, clearly has consistently denied these underlying claims. The only person who’s been inconsistent is the one making the claims.”

He later reiterated his pushback on Daniels’s interview, although Mr Shah did not once mention her by name. Mr Trump “denied the claims she made last night. He has been consistent in doing so, she has not”, he said.

Mr Cohen’s lawyer, Brent Blakely, wrote to Daniels’s attorney to say she had made false and defamatory comments, “namely that he [Mr Cohen] was responsible for an alleged thug who supposedly visited” and threatened Daniels.

“In truth, Mr Cohen had absolutely nothing whatsoever to do with any such person or incident, and does not even believe that any such person exists, or that such incident ever occurred,” Mr Blakely said in the letter, according to Reuters.

Daniels – real name Stephanie Clifford – claimed in the CBS 60 Minutes interview broadcast on Sunday that she was threatened with physical violence after she first attempted to go public with the story by a man who told her: “Leave Trump alone.”

Daniels said she was on her way to a fitness class with her infant daughter in Las Vegas in 2011 when she was accosted in the parking lot.

“A guy walked up on me and said to me, ‘Leave Trump alone. Forget the story.’ And then he leaned around and looked at my daughter and said, ‘That’s a beautiful little girl. It’d be a shame if something happened to her mom.’ And then he was gone,” she said.

Later, however, when explaining why she signed a document in 2018 that denied that any affair with Trump had taken place, she said she was told that if she didn’t “they can make your life hell in many different ways”.

Asked who “they” were, Daniels said: “I’m not exactly sure who they were. I believe it to be Michael Cohen. ”

The interview attracted 22 million viewers , leading to 60 Minutes’s highest ratings in a decade. Mr Shah declined to say whether Mr Trump had watched the interview. “I’m not going to get into what the president may or may not have seen,” he told reporters.

“I’d like to remind people there’s a minor child who’s name should be kept out of news stories when at all possible,” she wrote.

Melania was not with Mr Trump in Washington when the show aired. The White House announced that she was would be spending the week in Florida with their son, “as is their tradition for spring break”.

Mr Trump himself stayed silent on the matter, although he tweeted generally about “so much Fake News”.

“Never been more voluminous or more inaccurate,” the president added. “But through it all, our country is doing great!”

Representatives for the president have denied any sexual relationship with Daniels took place, despite Mr Cohen’s admission that he paid $130,000 to buy her silence. Mr Cohen claims to have paid the money out of his own pocket.

Daniels’s lawyer, Michael Avenatti, called that “ludicrous” during the CBS broadcast on Sunday.

On Monday Mr Avenatti appeared on morning TV to say that he would not yet reveal what he implied was additional evidence to back up Daniels’s claims. “We’re not going to get into the details of everything we have at this time, and there’s a reason for that,” he said on NBC’s Today show.

“We understand the American people want all the information right now, immediately. It would make no sense for us to play our hand as to this issue and we’re not going to do it right now.”

He also suggested the unidentified man Daniels says threatened her in 2011 must have been linked to Mr Trump. “It had to have come from someone associated with Mr Trump; there is no other place for it to have come from,” he said.

Up until now the tussle between them has focused on her claims of a sexual relationship – although Daniels told CBS they had sex only once, in 2006 – and Mr Trump’s denials, as well as an ongoing legalistic spat over whether the non-disclosure agreement signed by Daniels just 11 days before the 2016 presidential election to silence her was binding or not.

Daniels’s claim of an affair in 2006 bears striking similarities to the televised account given last week by a Playboy model. Karen McDougal told CNN that she had had an intense relationship with Trump for almost a year in 2006 and 2007, and that he had once taken her into his home in Trump Tower, Manhattan.

Both McDougal and Daniels allege that their encounters occurred within months of the birth of Barron, Mr Trump’s son with Melania.

A large number of women have also accused Mr Trump of sexual assault. He denies the claims. – Guardian