Extradition case raises stakes for both sides in Catalan crisis 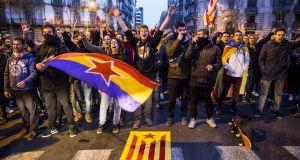 Nobody could have anticipated the manner in which Spain’s justice system would finally catch up with Carles Puigdemont: after five months of self-imposed exile, he was arrested at a service station on a motorway in northern Germany on Sunday as he returned from a conference in Helsinki to his base in Belgium.

The German judiciary will now decide whether or not to extradite the former Catalan president to face trial in Spain for rebellion, sedition and misuse of public funds.

While the arrest itself was a surprise, the fallout from it has been more predictable, fanning the flames of pro-independence outrage and threatening to divide further an already polarised Catalan society.

The thousands of Catalans who took to the streets of Barcelona on Sunday, chanting “Puigdemont is our president”, were not reacting only to the arrest of their former regional leader. On Friday, the scale of the Spanish judiciary’s response to what it views as the illegal actions of the independence movement had started to become fully apparent: the supreme court formalised charges of rebellion against 13 Catalan politicians, a crime which can incur a prison sentence of up to 30 years; and five of those charged were remanded in custody to await trial.

These developments have underlined the Spanish government’s refusal to engage politically with the Catalan problem, instead passing the responsibility for the crisis to the courts. In the eyes of prime minister Mariano Rajoy that makes perfect sense. He and his administration adamantly believe the priority must be the rule of law, which Puigdemont and his regional government violated with last October’s chaotic referendum and the ensuing, failed bid for independence.

But last week, shortly before the supreme court’s drastic decisions, former Socialist prime minister Felipe González had warned of the consequences of taking such an approach. “I hope [the judge] doesn’t put any of them in jail,” he said. “I know I’m swimming against the tide in saying that, but I hope he doesn’t, because when it comes to the independence movement we mustn’t destroy it, we must win it over.”

The last few days have hardened the notion among pro-independence Catalans that the Spanish state is intent not just on meting out justice, but on exacting revenge. As commentator Jordi Juan noted, the events of the last few days have “made the wall that separates the two Catalonias even bigger”.

With Puigdemont’s fate now in the hands of a German judge, the stakes have been raised for both sides. The independence movement has been obsessed in recent months with gaining the support of the international community and, in particular, the European Union. So far, that ambition has been thwarted at almost every turn, with the EU remaining steadfast in its support of Rajoy.

If Germany were to reject Madrid’s request for Puigdemont’s extradition it would be a stunning victory for the separatist movement and an endorsement of its claim that Spain is not respecting the line that separates politics from the judiciary.

But the Spanish authorities appear to be confident their request will flourish. If it does, it will strengthen the hand of Rajoy, who already enjoys a positive relationship with Berlin due to his assiduous implementation of austerity measures in recent years.

Away from the extradition proceedings, the Catalan parliament has still not managed to form a new government in the wake of December’s election, meaning Madrid continues to exert the direct rule it introduced in the region in October.

Both the Spanish government and the independence camp want a new regional president in place. But it seems the increasingly tense standoff can only be broken if the pro-independence parties present a new candidate who is acceptable both to them and to the justice system, which appears an increasingly difficult task.