US president Donald Trump cites a Friday night terror incident in Sweden during his rally in Florida, but there was no terror attack reported in the country. Video: Reuters 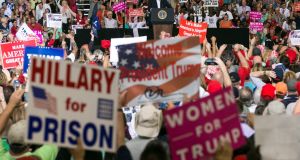 US president Donald Trump speaks at a rally at Orlando Melbourne International Airport, in Florida where he suggeste something terrible had occurred in Sweden. Photograph: Al Drago/The New York Times

US president Donald Trump escalated his attack on Sweden’s migration policies Monday, doubling down on his suggestion – based on a Fox News report – that refugees in the Scandinavian country were behind a surge in crime and terrorism.

Mr Trump set off consternation and ridicule on Saturday when he seemed to falsely imply to an adoring throng at a rally in Florida that a terrorist attack had occurred in Sweden, which has admitted tens of thousands of refugees in recent years.

On Sunday, as questions swirled, a White House spokeswoman, Sarah Huckabee Sanders, said that “he was talking about rising crime and recent incidents in general, not referring to a specific issue”.

Mr Trump then said on Twitter that he was referring to a Fox News segment about an American filmmaker who argues that the police in Sweden were covering up a migrant-driven crime wave.

Officials in both countries expressed alarm and dismay on Monday at Mr Trump’s remarks. Democratic senator Bob Case said the president should get his information from intelligence agencies and not from television. The Swedish Embassy in Washington offered the Trump administration a briefing on its immigration policies.

Sweden’s prime minister, Stefan Lofven, said he was surprised by Mr Trump‘s comments, and noted that Sweden ranked highly on international comparisons of economic competitiveness, human development and income inequality. “We have challenges, no doubt about that,” he allowed, adding: “We must all take responsibility for using facts correctly and for verifying anything we spread.”

Yet even before the prime minister spoke, Mr Trump pursued his attack. On Twitter, he suggested that the news media was covering up problems related to migration in Sweden. “Give the public a break – The FAKE NEWS media is trying to say that large scale immigration in Sweden is working out just beautifully. NOT!”, he wrote.

Immigration is, in fact, a hotly debated issue in Sweden, Germany and many other European countries, and a subject of frequent news coverage. However, statistics in Sweden do not back Mr Trump’s claims. Preliminary data released last month by Sweden’s crime prevention council found no appreciable increase in crimes from 2015, when the country processed a record 163,000 asylum applications, to 2016.

The council did note an increase in assaults and rapes last year, but also recorded a drop in thefts, robberies and drug offences. Officials say they have not seen any evidence for the claim, prevalent in right-wing media such as Breitbart and Infowars, that migration has driven a surge in crime.

“The general crime rate in Sweden is below the US national average,“ the State Department noted in May 2016. Although terrorism is a concern for Sweden – an Iraqi-born Swede carried out a suicide bombing in central Stockholm in 2010 – authorities say they are equally worried about racist hate crimes, including attacks on migrants.

Carl Bildt, a former prime minister and foreign minister of Sweden, made a jab at Mr Trump on Twitter: “Just a piece of friendly advice: when you are in a hole, stop digging.” A terrorism expert, Magnus Ranstorp, research director of the Centre for Asymmetric Threat Studies at the Swedish Defence University in Stockholm, said Mr Trump was trying to shift the focus of his comments from asylum-seekers and crime to immigration in general.

Members of parliament in Sweden expressed anger. “This statement created an unnecessary discussion and misunderstanding,“ said Karin Enstroem, the foreign affairs spokeswoman for the opposition Moderate Party. “We expect the president of the US to base his statements on facts.”

Another member of parliament, Pernilla Stalhammar, the foreign policy spokeswoman for the Green Party, expressed surprise that Mr Trump had relied on Fox News for information about Sweden. “The problem is that the segment had a lot of incorrect information in it,” she said. “There aren‘t any no-go zones in Sweden and the number of crimes against individuals is at about the same level as it was.”

After the terrible events #lastnightinSweden , IKEA have sold out of this: pic.twitter.com/Bs1XI7ffKG

Sweden? Terror attack? What has he been smoking? Questions abound. https://t.co/XWgw8Fz7tj

My statement as to what's happening in Sweden was in reference to a story that was broadcast on @FoxNews concerning immigrants & Sweden.

She added: “This incident demonstrates the importance of thoroughly critiquing sources to prevent spreading incorrect images that risk fomenting xenophobic sentiments in society. That Sweden is portrayed incorrectly is very serious. We cannot allow reality to be kidnapped by untruths that become true just because they are repeated enough times.”

The Fox News segment was an interview by the host Tucker Carlson with Ami Horowitz, a filmmaker who asserted that police “oftentimes try to cover up some of these crimes” committed by migrants.

On Fox News on Monday, Carlson argued that although “the president ought to be precise in what he says, there should be no confusion about what he means.” Carlson said that assimilation had failed and that immigration was “in the process of totally changing these ancient cultures into something different and much more volatile and much more threatening.”

Critics of Sweden’s migration policies have pointed to a Facebook post on February 3rd by a police officer, Peter Springare, who said that migrants were taxing Sweden’s pension, education and health care systems and that migrants were the principal culprits in assaults. Some of them were without papers and could not be properly prosecuted, he said.

“Half of the suspects we cannot even be sure of because they don’t have any valid papers,“ he wrote. “Most often this means they are lying about their country of origin and identity.”

However, other police officers disagree. The Swedish newspaper Dagens Nyheter on Monday quoted two police officers interviewed by Horowitz, Anders Goranzon and Jacob Ekstrom, saying that the filmmaker had selectively edited and distorted their comments to prove his thesis in a video he posted on YouTube. They said Horowitz had asked them about high-crime neighbourhoods, and that they did not agree with his argument about the link between migration and crime.

Mr Lofven, the prime minister, told the newspaper Expressen on February 7th that Mr Springare was exaggerating. “I have a hard time seeing that 100 per cent of the police’s investigative capacity is occupied with crimes perpetrated by immigrants,“ he said.

Mr Trump baffled people in Sweden with his comments at the rally in Florida on Saturday night.

The comment prompted a barrage of social media reaction, with hundreds of tweets, and a local newspaper published a list of events that happened on Friday that appeared to have no connections to any terror-like activity.

On Sunday, Mr Trump used Twitter to explain: “My statement as to what’s happening in Sweden was in reference to a story that was broadcast on FoxNews concerning immigrants & Sweden.”

Sweden’s Security Police said it had no reason to change the terror threat level.

“Nothing has occurred which would cause us to raise that level,” agency spokesman Karl Melin said.

It listed in English some events that included a man being treated for severe burns, an avalanche warning and police chasing a drunken driver.

One Twitter user said: “After the terrible events #lastnightinSweden, IKEA have sold out of this” and posted a mock Ikea instruction manual on how to build a “Border Wall”.

In the month he has been president, Mr Trump’s remarks and those of his staff have fuelled numerous news media “fact checks” pointing out inaccuracies and falsehoods.

On the subject of terrorism, Trump counsellor Kellyanne Conway referred to a “Bowling Green Massacre” that never occurred.