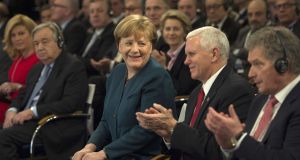 For five decades, western political leaders have gathered at an annual security conference in Munich to grapple with crises in the unstable, violent world beyond their democracies. This year the focus of their conversations was noticeably different: the challenge for the liberal world order is the most powerful man within it.

The foreign policy of US president Donald Trump dominated the agenda this weekend, inflecting every discussion from those on conflicts in Ukraine, Syria and Yemen to simmering tensions in the Baltic, Black Sea and Korean peninsula. The most critical question was over Washington’s future course with Russia.

At face value, the message to anxious US allies was one of reassurance.

Mike Pence, US vice-president, pledged the “unwavering” support of the US for Nato in a speech on Saturday that leant heavily on traditional Republican foreign policy values. He promised continuity in Ukraine and asserted that Russia would be “held to account” for its aggression, echoing remarks on Friday by Rex Tillerson, the US secretary of state, and Jim Mattis, the secretary of defence.

His speech received a cautious welcome.

“To say that I am reassured by Mr Pence’s words would be saying too much, but I welcome his clear determination to give us these reassurances,” said Norbert Röttgen, chairman of the German Bundestag’s foreign affairs committee.

“We also appreciate his attempts to integrate the president into his [words of support] by mentioning him several times in his speech. But the insecurity [aroused by Mr Trump] runs deep and we can’t wish it away.”

Mr Trump has consistently attacked many of the institutions and principles the US’s closest allies hold dearest, often on social media. He has poured scorn on Nato, threatened trade wars, attacked the press and praised Russian president Vladimir Putin.

“There are people [in Washington] with whom you can do business,” said Elmar Brok, former chairman of the European Parliament’s foreign affairs committee. “But they have one serious problem, as we also have. They don’t know what the president will put out on Twitter tomorrow.”

Ian Bremmer, president of Eurasia, a US-based political risk group, said the problem was that nobody knew whether Mr Trump would eventually cleave to Republican orthodoxies in international relations, or continue to go his own way.

That US allies at the Munich conference took more assurance from the comments of the US congressional delegation rather than Trump officials is itself a telling sign of their wariness.

Lindsey Graham, a Republican senator, promised on Sunday that tough new sanctions against Russia would be “top of the list” for the US congress once the president’s cabinet had been finalised.

“If you’re worried that we are not going to look long and hard at what Russia did in our election just because Trump won and the Republicans are in charge, you don’t need to worry about that,” Mr Graham said. “We are . . . 2017 is going to be a year of kicking Russian ass in congress.”

Mr Graham’s implicit message appeared to be that if the presidency could not be relied upon, congress could be.

Democrat senator Chris Murphy reiterated the point: “[Russia] has paid very little price . . . there is a unique role congress can play,” he said.

But many European diplomats agree with the off-the-cuff remarks made by John McCain, another Republican senator and a stalwart of the conference, in which he said: “In many respects this administration is in disarray and they have got a lot of work to do.”

Francois Heisbourg, a veteran French diplomat and chair of the International Institute for Strategic Studies, tweeted on Sunday: “My biggest takeaway from [Munich] – the mess in the US is worse than I thought.”