Three years after carnage in Kiev, war and corruption have not killed hope 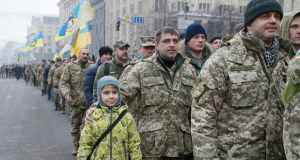 Veterans and their relatives attend a ceremony to commemorate Ukrainian servicemen killed during a military conflict near the town of Debaltseve in the east of the country in 2015, in Kiev, Ukraine on Saturday. Photograph: Valentyn Ogirenko/Reuters 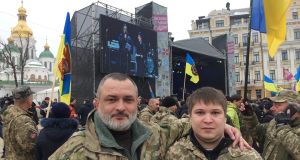 Wolf (left) and Tank, the noms de guerre of Ukrainian soldiers at a concert in Kiev on Saturday in memory of servicemen killed in the 2015 Battle of Debaltseve. Photograph: Daniel McLaughlin 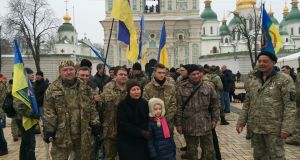 Serhiy (far left) and other Ukrainian soldiers and their supporters at a concert in Kiev on Saturday in memory of servicemen killed in the 2015 Battle of Debaltseve. Photograph: Daniel McLaughlin 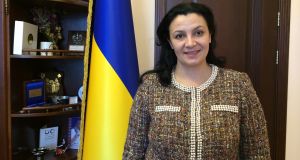 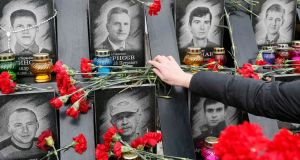 A participant lays flowers during a commemoration ceremony at the monument to the so-called “Nebesna Sotnya” (Heavenly Hundred), the people killed during the Ukrainian pro-European Union mass protests in 2014, in central Kiev. Photograph: Valentyn Ogirenko/Reuters 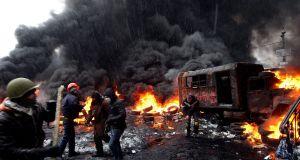 Protesters clash with riot police during an anti-government protest in downtown Kiev in January 2014. More than 100 protesters were killed in the 2014 unrest. Photograph: Zurab Kurtsikidze/EPA

Serhiy shifts his weight on his crutch, takes a deep breath, and starts to explain how Ukraine has changed since its pro-western revolution ended in carnage on Kiev’s Maidan square three years ago.

“Almost everything is worse,” says the former soldier, who was wounded fighting Russian-led separatists near their stronghold of Donetsk in eastern Ukraine.

“People are too poor to pay their rent and bills. As a veteran with invalid status I get about 1,700 hryvnia (€59), but soon they’ll stop paying it and I can’t find any work. But I’m not just talking about soldiers – for a grandmother on a pension of 1,200 hryvnia (€42) it’s even worse.”

Serhiy was among hundreds of servicemen and their supporters who attended a concert near Maidan this weekend, to pay tribute to soldiers killed in February 2015 during a heavy defeat at the strategic eastern town of Debaltseve.

Many of the concertgoers described Ukraine’s tortuous recent years – from the Maidan protests and the ousting of Ukraine’s Kremlin-backed president Viktor Yanukovich, through Russia’s annexation of Crimea and fomenting of a separatist conflict in Donetsk and Luhansk regions – as part of the same, grinding war.

For them and most other Ukrainians, the main enemies of Maidan are still to be vanquished: the “oligarchs” who control the nation’s politics and business; corrupt officials, judges and prosecutors who do their bidding; and a Russia whose leader, Vladimir Putin, cannot allow a pro-western, reformist Ukraine to prosper.

“We all supported Maidan, many of us were on the square, and we still support what it stood for,” says a former soldier from 12th battalion of Ukraine’s territorial defence force, who would only give his nom de guerre, Volk (Wolf).

“But we see oligarchs and thieves still in power, and that’s not what we want.”

“There are some small improvements, but the system is still the same,” says another soldier, nicknamed Tank.

“We don’t have any trust in our so-called leaders – none of them have earned the right to be called leaders.”

“We can’t give up,” says Nadia, a student laying flowers before a memorial to the so-called “Heavenly Hundred” of slain protesters.

“For those who died here, for those fighting and dying defending us against Russia, for the honest people trying to stop corruption. We have no right to say we are tired of this. We have to keep going, despite the problems.”

It was Yanukovich’s decision to scrap a historic political and trade pact with the EU and move closer to Russia that sparked demonstrations in November 2013; when riot police beat student protesters on Maidan, those relatively small rallies became a near-nationwide movement to topple a venal and violent regime.

“I am open about us not being where we hoped to be three years after Maidan,” says Ukraine’s deputy prime minister, Ivanna Klympush-Tsintsadze.

“We hoped it would be much easier, and that the country was not so ruined from within. But if you compared a picture of Ukraine in 2014 and now, you would see enormous changes.”

Klympush-Tsintsadze hails the creation of new anti-corruption agencies, economic stabilisation and a return to modest growth, reform of the banking sector and the introduction of a new public procurement system.

Yet no one has been convicted for ordering the killings on Maidan, a failure that allows Russia and some Ukrainians to accuse Kiev of a cover-up.

Ukraine also still appears to lack the ability or the will to jail top politicians and businessmen for corruption, a weakness that Klympush-Tsintsadze hopes will be cured by long overdue judicial reform.

“We are seeing city- and regional-level officials brought to justice. They may not be the big fish that we want to see, but it never happened here for 20 years,” she told The Irish Times in her Kiev office.

“And those who are guilty of the [Maidan] killings, and of inviting Russia into Crimea and eastern Ukraine – we want to see them behind bars as soon as possible.”

Concern over US president Donald Trump’s desire for a rapprochement with Russia have eased a little in Kiev, due to firm statements from Washington and EU members over a recent deadly surge in fighting in eastern Ukraine.

With Trump’s intentions still unclear, however, and elections looming in Germany and France, Ukraine still fears being sidelined as major powers decide its future.

“There can be no deal between Russia and the West without a sincere deal between Ukraine and Russia, based on international law and respect for the sovereignty and territorial integrity of our country,” Klympush-Tsintsadze says.

On Saturday, Putin decreed that Russia would now recognise the validity of passports and other documents issued by the separatists in Donetsk and Luhansk, in what Kiev and the US called a clear breach of a fraying peace plan.

Ukrainians “have already made our share of compromises” to secure peace, Klympush-Tsintsadze says.

“We’ve made some very painful ones, and I don’t think there’s any room for additional compromises at Ukraine’s expense.”